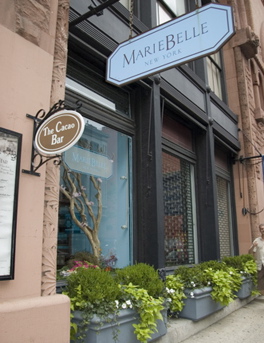 This week, we've got shills in the comments and on the Chowhound. Until the shillers learn, we will continue to hunt them down. First, the least suspicious:

A tipster points out this review of newcomer Stanton is a bit suspect, and we have to agree that the first name references could always imply a friend of the house: "Just tried out this new spot on 79th and 2nd-in space where Santa Fe used to be. Husband and wife team with former chef from Felidia's opened last night....Our main couses consisted of a very good rendition of sliced skirt steak served over fried rice w a teriaki like sauce. Companion had the carbonera which I would have ordered another serving if it wasn't for the fact I am watching my figure for upcoming Holidays! Also had a serving of the truffled mashed potatoes-deeeeeelish! Will be back to revisit Stanton and his lovely wife Raquel's restaurant and taste more of chef's Peter's fab cooking!!
Shill Probability: 52%
UPDATE: The accused shiller writes in in his defense: "I have no idea why someone would accuse me of shilling-if they punched in UES Mayor they would see the hundreds and hundreds of comments I have posted to board. I only fortunately came upon Stanton the first night they opened and happened to be their very first customer-I also happen to be a foodie and knew owners from Uva."

An excerpt from a suspicious email found in the inbox: "Mariebelle's is like going back in time to say Vienna or Paris. Families, couples, sitting around cafe style eating food, desserts and HOT CHOCOLATE OMG. It is indescribable and so is the laid back experience. I am sure its been around for a long time because it looks like a place that has regulars definately not a tourist trap...For mothers and daughters looking to chill after window shopping, or fathers and daughters looking for one on one time, or grandparents and little ones to instill tradition, a great dating place GO GO GO....Everytime we are in NYC we go to Mariebelles...LOVED IT! http://www.mariebelle.com/ AND THIS IS NOT A COMMERCIAL LOLOL"
Shill Probability: 71%

Someone goes over the top in a comment about newcomer Union Prime: "Ok...well im not sure about all these comments above but what I do know is that I was in there this past week and the entire experience was something ive been seeking for a while. It definitely makes you feel like you were put in a time machine and brought back to Manhattan in the 1940's, with all the classiness and glamour portrayed in the movies...The sushi was to die for...I overheard the sushi chef was from blue ribbon and it showed. As for the other food, the steak was prepared perfectly and we ordered sides of these lobster mash potatoes, brussell sprouts and some creamed spinach. INCREDIBLE...the greatest part of the experience was the fact that I could sit there for four hours, sipping on yes...'hand crafted' cocktails that are SO REASONABLY PRICED....with lighting that makes everyone look sexy. Its the type of place where you can strike conversation up with anyone and sit and chat all night..."
Shill Probability: 84%

Two incredibly suspect comments on a post about the recently relaunched Prespa: "Prespa is fabulous in everyway. The chef is a genius. Came to NYC for the golden goggles award starring Michael Phelps. Everyone in the group said the Prespa experience was the best food and presentation they had had in their entire lives! And they meant it. It was outstanding." Followed with this praise "Prespa: new owner, new menu, new concept, new chef...the only thing that seems the same is the name. Went for a benefit for the NYU Medical center last night. While I intended to go just for a drink I changed my mind and ended up having dinner with four friends. The food was outstanding...the chef is a real artist and the place is beautiful."
Shill Probability: 98%