Top Chef: I Don't Give a Sh*t About These People

Share All sharing options for: Top Chef: I Don't Give a Sh*t About These People 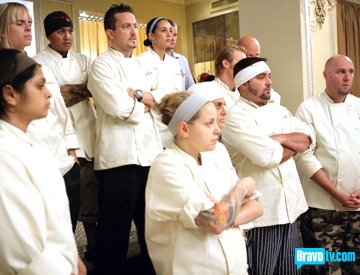 Before eliminating Alex last week, Top Chef producers made a point to focus on Alex's storyline and reintroduce him so that viewers maybe cared about him before he was politely shown the door. It didn't work, and I had to check Bravo's website to remember his name. But now he's happily married. I guess? I don't care. Will producers try the same tactic this week?

Around the house, Stefan, the clear favorite, has a thing for Jamie, and he makes a pair of pants for her teddy bear using a PARTICULAR BRAND of dish towel. Doesn't he realize that she's a lesbian? Yes, he does, but Stefan doesn't seem to me like the sort of guy that cares. He seems to me like the sort of guy that thinks all that lesbians need is a good deep Stefanning to see the light. It is deplorable, but despite it all I still want to be his friend.

Padma, sans guest judge, announces that the Quickfire will be a palate test. The chefs pair off into twos, and the Challenge is using the rules of that dice game in Pirates of the Carribean 2 (weird reference, but Stefan reminds me of Stellan Skarsgard), where the chefs go back and forth betting how many ingredients they can name until one calls the other's bluff. Hosea and Danny are first, and Hosea says that Danny has more brains than people give him credit for. I am giving him credit for no brains, so there's a lot of leeway there. Hosea says he can name like two ingredients in the soup and Danny calls his bluff. I'd like to play poker with him. Hosea says "soup" and "hot" and wins. Or something.

Stefan pisses off Leah, to whom he gives an "ass whooping." Stefan says, "I'm always confident. I'm good at playing games. I don't give a shit about these people." Swoon. Speaking of the opposite of that, Carla wins an early round and reveals she is a crazy Ridley Scott Alien.

It eventually comes down to Hosea and Stefan, and Hosea takes it on vegetable oil. Bald people are great at cooking! See: Tom. Hosea has immunity, and Stefan is not a very big fan of losing. Something he is a big fan of is wearing a shirt that says, I think, "I Make Good Baby." Is that a creepy German come on? "I Vant My Tiny Stefan To Make a Tiny Stefan Inside You."

The chefs draw knives for the Elimination Challenge. The teams: Old, New, Borrowed, Blue. Like at a wedding! They are cooking for Gail's bridal shower. Danny is a little too excited. He thinks that Gail is gonna be a hot bride. OK, alright, that's enough.

Each team has to brainstorm a course based on their theme. Blue is hard, because there is no blue food. Danny's on Team New. He says that new makes him think of pickles. That's incredible. "But I guess lots of stuff make me think of pickles: fire alarms, friends from high school, songs that have clapping in them, pictures of pickles, lots of stuff." But Danny redeems himself with the idea of pairing Eugene's surf and turf sushi roll with a peach barbecue sauce. OH BOY.

In the supermarket, the producers show pictures of Carla's husband while she yells Hootie in a store full of strangers. It's weird no one says "Hoo" back. Stefan and Hosea seem to butt heads over who is calling the shots on Team Old, and Stefan calls Hosea the Douche Boy. I had never heard that phrase so I looked it up on Urban Dictionary: "A kid who gets so wasted he passes out on the toilet with his clothes on, then forgets his clothes are on so in the end shits himself." Selective editing, Bravo! I think you should have made one of those weird 30 second segments Hosea being a Douche Boy.

That night at the house, Eugene is inspired and has the idea to let the ladies at the bridal shower assemble their own sushi, just like Gail has the choice whether to get along with her husband's family or not. (Huh?) Danny loves it. He can just put all sauces all over the place. "A little bit of splooge." BAM!

Gail has very attractive friends! Padma bought all the purple in the world so don't try finding any. The guest judge this week is Dana Cowin, the editor of Food & Wine. Danny seems nervous, and the way you can tell is that his beard notches are a little wider. I think they are like gills and that's what happens? I don't understand how fish work, or Danny.

Everyone enjoys Team Old's tomato three ways, though Hosea gets hand tremors around women. Did you know Stefan is twice divorced? We now do. Ariane almost undercooks the lamb, but everybody loves it, and she's named the winner. Even she's surprised, and Jamie, who thought she had it, is visibly irritated. "None of us expected anyone but me to win." Eater.com Editor Amanda Kludt texts me, "Can we please point out how arrogant and crazy Jamie is?" Yes, Amanda. Yes we can.

No surprise to anyone, Team Deli Sushi Bar is on the bottom. But so is Team Blue. Even Fabio's Italian charms cannot stop people from thinking his Chilean Sea Bass was old people food. But it wasn't as bad as Team Make Your Own Garbage Pile. Danny is oblivious to how gross their food was. "I was overwhelmingly happy." Tom says, "This was a disaster." Tom would love to send all three home, but the rules of television dictate he can only send one, and it's Danny. God, this is disappointing. My job is about to get a lot harder. Danny says "I don't think the judges got what I was doing." No one did, Danny, but we all wanted you to stay around so we could try and figure it out.