Top Chef Recaps: It's Not Even the Taste, It's Just the Consistency

Share All sharing options for: Top Chef Recaps: It's Not Even the Taste, It's Just the Consistency

Since we didn't get a chance to do this on Thursday, here's a belated look last week's Top Chef, one of the more ridiculous episodes in recent memory—Thanksgiving in July, The Foo Fighters, an Achatz/Swanson Chicken broth quickfire—from comedian Max Silvestri: 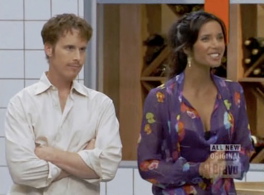 I hope everybody had a great Thanksgiving holiday. What did you give thanks for? Did you give thanks that even though your dessert was so sweet that Padma near-ralphed you still did not get sent home? If you answered "yes" to that question, your name is Ariane and you should learn that something isn't a martini just because it's served in a martini glass.

Purplma introduces this week's guest judge, Grant Achatz of Chicago's Alinea. This cutting edge chef battled tongue cancer and won the James Beard Award for best chef while his taste buds were broken, so he will probably not put up with hot dog spring rolls or salami martinis.

The curiously synergistic Quickfire Challenge in this episode forces the contestants to literally take a page out of the Bravo's Top Chef: The Show: The Official Cookbook. They've got to cook a recipe from a previous season! They should probably give themselves a fauxhawk just to get in the mood of years past. By the way, I am now not going to buy that book just on principle. Just kidding. I would never have bought it. But Padma's got a sexy curve ball: the contestants need to transform their recipe into a Swanson soup featuring Swanson broth if they want a Swanson's chance in hell at winning this Swanson Quickfire Challenge. Praise be to Swanson.

Daniel, with only faint whispers of his beard notches remaining, impresses with some ham and egg soup. Jamie's very proud of her chickpea soup and hopes to score a win for Team Rainbow, which is really more of a two-person partnership now. But Leah represents New York and wins the challenge with her tuna tartare and white asparagus soup. She's immune! And she has a great rack, according to Richard.

This week's Elimination Challenge is to cook a Thanksgiving Dinner for some very special clients. Breaking into two teams, Leah picks her dream lineup. The Unwanteds on the other side don't stand much of a chance. But everybody loves an underdog. Team Leah's one weakness is that they are in 7th grade and gave themselves the name Team Sexy Pants, as apparently Team Yeah Baby Yeah and Team Alright Then were already taken.

Daniel thinks/hopes their client will be Donald Trump, him being the most richest and powerfullest man in New York. Sorry, Daniel, it's the Foo Fighters. Neat? They've given Padma their tour rider with all their likes and dislikes. Maybe the chefs will prepare Viactiv Calcium Soft Chews stuffing and Ensure gravy. The joke here is that the Foo Fighters are old. But rock stars are a funny bunch. For example, they like having Thanksgiving in July, when this was filmed.

The twist, other than having to be in Rochester, is that the contestants can only cook with microwaves and toasters. This will be quite a challenge. But Fabio sums it up best: "If we pull this out, there is no way for anybody in United States to have one excuse for don't pull out a good meal for Thanksgiving." Don't even try pulling out, America.

Ariane is Team Cougar's mascot, because she's tan and over 40, I guess. She thinks a cougar is "hot and sexy." Sure. Certainly not sad and desperate. As she's in charge of the turkey, I'm sure her team is hoping she lives up to her name and screws the younger and more desirable team.

And she does. Her turkey is universally praised. But the Cougars fumble on the stuffing and the potatoes, and then fumble even harder on the barfait and the s'mores. Dave Grohl hates the consistency of the parfait, and Padma's face agrees.

"It's one of those things you put in your mouth and you don't know whether you should chew or swallow."

Daniel thinks they have it in the bag, and he's got both his party hat and party underwear on in preparation for seeing the concert, the prize for the winning team. (I don't think he knows that hats are rude at a concert.) Well, sorry, Daniel. Team Sexy Pants wins. Save your party underwear for another day. Or let Melissa borrow it, because she has a lot of dancing to do.

Jeff, Danny and Richard end up on the bottom, but it's the spit-covered banana s'mores, a "failed concept" according to Achatz, that hand Richard his ticket home. Richard is sad because he's been trying for three seasons to get on Top Chef and win it. Well, don't be sad, Richard. There's nothing that says you can't be on the show again next year, except the rules.
—Max Silvestri