Top Chef Recaps: I Spit Yours Into My Napkin

Share All sharing options for: Top Chef Recaps: I Spit Yours Into My Napkin 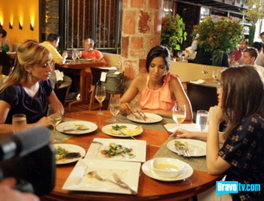 With two cooks gone, our cheftestants begin to feel the pressure. Stefan is 2 for 2! What if he wins every single challenge from now until the end of the show? Statistically, he is on track. His European partner-in-war-crimes Fabio is not worried, though. Fabio knows that it doesn't matter how many dragons you kill, it's who takes home the princess. He is Super Mario? I think that means he doesn't care about the show but just wants to marry Padma. You and me both, pal.

Does the Glad® brand also own and market the color purple? Because Padma is wearing it this season like it's her job and she's fighting for a promotion. Anyway, she and Donatella Arpaia reveal that this week's Quickfire Challenge is trés New York. Melissa thinks it'll probably be cheesecake, because nothing is more New York than meeting up with your buddies at the Junior's in Times Square to just let your hair down and be yourselves. I have "Junior's in 20?" saved as a QuickText in my phone. But Melissa is wrong and this challenge is hot dogs. Yum. No way these chefs are gonna mess that up and make a ton of nauseating garbage snacks. Oh wait, I'm proven wrong very quickly.

Jill uses store-bought hot dogs to whip up the gnarliest spring roll I've ever seen. (The secret ingredient is hot dogs!) Stefan is really happy with himself for coming up with the term "World Dog," but even the insider move of feeding Padma booze ("my favorite part of this dish was definitely the part where I love booze") isn't enough to convince her it's not a mistake. In the end, Donatella awards Radhika immunity for her lamb hot dog. Donatella was especially impressed by how Radhika embraced the "Indian theme," which is how you reference someone's ethnicity when you are awkward.

The Elimination Challenge is a heavy one for this early in the season: the contestants have to conceive and execute a three course meal out of Tom Colicchio's Craft, and they have to do it for a restaurant full of New York chefs who applied for and were denied a spot on Top Chef. Everybody's a little nervous, but Fabio reminds the house about dragoons. Leah and Hosea ease the pressure with some light petting. Don't forget there is no hooking up on Bravo, guys. Fun fact: Bravo doesn't STD test their reality show participants, so said participants aren't allowed the opportunity to try and get some STDs. But no big deal. Leah: I love being in relationships too! Facebook me. I'll pay for the test out of my own pocket.

The contestants split up, each preparing either an app, an entree or dessert. Jeff gets the group organized, much like his medicine cabinet. Jill buys an ostrich egg to be "original", but it is not as original as her bedazzled pink tank top. Dress for the job you want, Jill. As the food gets served, all the failureheads out on the dining room floor turn catty and say lots of petty things:

"I'm the biggest retailer in the US."
"I don't use any animal fat or butter in my restaurant."
"As a possible candidate for Top Chef, I definitely would have made this dish more desperate."

You can practically see on some of these diners' faces that they are hoping, just hoping so hard, that a cameraman says to them, "Wow, that comment you made about this crab dish was really insightful and full of moxie. I hope this isn't too forward, but would you like to have your own show on Bravo? It would be called BEEP BEEP BEEP" and then they realize it's their alarm going off, time to wake up, this is all a sad dream that will never come true.

Fabio ends up winning the Elimination Challenge with his beef carpaccio and gusher olives. Jill, Ariane, and Hosea face elimination. When asked why her dish was such a hot mess, Jill stumbles through a bunch of nonsense about timing and pressure in what Gail calls the lamest defense she's seen in five seasons of Top Chef. Oof. Gail has spoken like the battle-tested veteran she is: Jill's going home.