One Year In: Irving Mill

Share All sharing options for: One Year In: Irving Mill 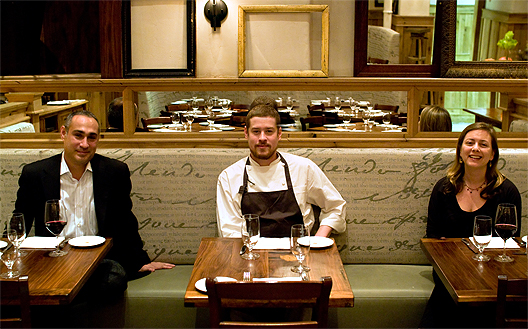 Irving Mill opened a year ago after a good deal of early buzz but was soon deemed a bit of a disappointment by many in the food media. The idea, a homey, New American neighborhood spot, was decent enough, but in many ways the vision wasn't successfully realized. 10 months into the restaurant's tenure on east 16th Street, the owners Suzanne, Mario, and Sergio Riva parted ways with opening chef Johnny Schaefer and picked up rising star Ryan Skeen. Now it's a whole new ball game:

How did the opening go. Any stumbling blocks? Suzanne Riva: I think so. I think that really getting our own identity was the biggest stumbling block of our opening. We were compared to other places and we had a very clear vision ourselves of what we wanted to be, but that was our biggest challenge.

What was the identity you were going for? SR: My husband and I have lived on this street for 10 years and had always felt that this particular part of Union Square and Irving Place lacked a quintessential neighborhood restaurant. Our plan was to open a place that could fill that niche and be a family-owned neighborhood place that anyone could come to any night of the week...We wanted it to be high energy, and I think that was hard for us.

Why do you think it didn't work out that way in the beginning? SR: I think we came across as too serious.

How was the menu when it first launched? SR: Our menu was a basic a la carte menu. MR: And we had a tasting menu. It was very straightforward. SR: Appetizer, entree, dessert. Did you make any changes prior to switching chefs? MR: We started to add more of a bar menu with little bites to get a more casual feel without sacrificing the level of food.

And when did it come to the point where you decided you needed to change chefs? MR: It was obviously a very difficult decision. We basically realized that our concept for the restaurant and where we wanted to take the restaurant were going in different directions. And we just said you know what, it might be time to part ways. How did your directions differ? MR: We wanted to have a little more energy in the room. SR: It was a little more delicate. MR: A little more serious.

Did the decision reflect reviews in the press? SR: It reflects them. Especially if you agree with them. You know you set out to do something and you don't really feel that your vision has been realized to the extent that you want it to. MR: Right, and one of the things with Ryan that we always talk about is you know obviously with the reviews, the only time I heed something in a review is when it rings true. The bulk of the reviews came out in late '07 and the New York Times review came out January 2nd, 2008. We didn't part ways until July, so it definitely was not a cause and effect by any stretch.

I know Ryan you didn't come along immediately, so what was the search like on both sides? SR: We interviewed some great chefs. We had no idea who was going to come our way at that point. We were really happily surprised when we saw how many people were out there. MR: One of the reasons we were so excited about Ryan is we felt it was a great match. We did a tasting and we were really blown away by some of the stuff he did.

And coming in, what was the process of writing the new menu? Ryan Skeen: We had a concept of what we wanted to do. And I think especially coming from Resto, I felt boxed in as to what I could do. So it was very liberating. I was looking at a bunch of places during my search when I left Resto and this place felt like the best fit for what I do. When I got here we all talked about what we wanted to do with the menu, what we wanted to see. We weren't trying to please everybody but we're definitely coming at it with a more laid back approach. Eating should be fun.

What kind of constrictions did you have before that you don't have here? RS: They've pretty much let me run hog wild, so to speak. I think they're open. I think sometimes they thought "oh god" when they saw the process of making boudin noir downstairs. They probably scratched their heads a couple times in the beginning. But they let you do your thing. RS: It was nice because it required a lot of trust.

How would you describe the new menu to someone who hasn't been here yet? A lot of mention has been given to the porkiness. RS: I think it's somewhat educational too. A lot of the techniques we do that aren't mind blowing techniques but they are things a lot of New Yorkers have forgotten about, a lot of kitchens have forgotten about. I don't think anyone should be scared of pig's head. If you can get that table of Sex and the City girls to eat pigs head and boudin noir, then that's great.

Have the prices changed at all? SR: I think our price point is similar if you're looking at appetizers and entrees because I think our previous menu was pretty reasonable. Where you have a broader range is that we have so many more options. We're doing sausages and pates and the burger and the bites and the pastas now. Now there are two different prices.

How often will you change the menu? RS: The pasta section will probably change the most. We have five or six pastas that rotate. We only have three on the menu at a time. That's what I really enjoy doing, the pasta work. It's almost like religion to me. But everything else, I'd like to let it change organically. Definitely we try to stay seasonal but I hate the phrase "market driven restaurant." It's so general nowadays and I don't want to be limited to what's two blocks away. MR: It gets pretty barren this time of year. RS: There are great markets all over the country, there's great produce coming from small farms all over the country. I like to have a free form kitchen. I grew up in those kitchens where after you're there for a year, without talking to the other chefs you know what you're going to run in January, you know what you're running in March. It doesn't do much for the cooks

Any other tweaks to the restaurant planned for the next year? SR: I've been working a lot on our wine list, we've done a huge beer list, and a new cocktail list. And any new projects on the horizon? Irving Mill 2? SR: We have a restaurant in the works. For some time now. Right around the corner. We're working on an Italian trattoria right on Irving Place and 16th. Any names yet? SR: We don't have one yet. A few have been thrown out. What's the concept there? SR A nice little Italian spot. Much smaller. MR: Less than half the size. SR: Our landlord here owns the building over there and we always told him we need another space because there are no great Italian restaurants in the vicinity. What's the projection?
MR: That's the question. We're thinking five or six months.

What lessons have you learned from this experience that's helping you over there? MR: They're very different restaurants and concepts, but a lesson we have to remember is that the concept or the feel of the restaurant needs to run through the entire place. There has to be cohesion. Food has to be first and foremost but the music and the energy level and the price point have to be consistent.

How's it different opening a place now versus a year ago? SR: Terrifying? People are much less likely to throw money at you. MR: The economy may get better, it may get worst, but New Yorkers are going to eat and they're going to eat out. Invariably we all go back to eating out or ordering in, and that's sort of out of your hands. We talk about it all the time, but you can just concentrate on what you're doing.
· Previous Installments of One Year In [~E~]