Last night the long delayed, as in over a year delayed, 10 Downing opened to the public after a week and a half of friends and family dinners, an onslaught of press buildup, and some not so subtle shilling from friends. A low key opening, the room ranged from half to three quarters full throughout the evening, and all three owners, two chefs—Jason Neroni and Katy Sparks— and PR mastermind Steve Hall (all relieved they were finally open) were on hand to make sure it all went smoothly. 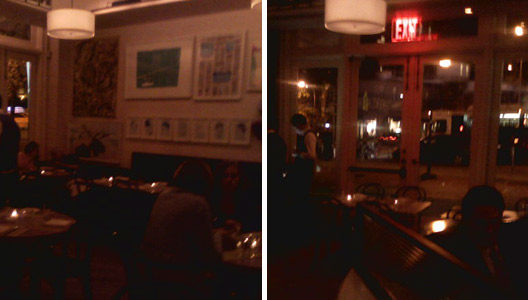 Guerilla shots of the dining room, which the restaurant/HallPR, somewhat absurdly, doesn't want shot because "it kills the anticipation of the work being seen in person."

It may have some acoustic issues—something Franktastic will harp upon—but the space itself, with its unusual shape, wall of windows, and inclusion of modern art pieces, turned out to be quite a looker.

PR provided look at the bar

On the food, seeing that enough of the pros (and not so pro) visited for friends and family, we'll let them weigh in on Neroni's performance—we expect Dame Greene's write up in 3, 2, 1...—but see the menu (complete but for a charcuterie plate) for yourself below: