With sister site Eater Chicago due to launch this month, we figured it was the perfect time to focus on Chicago's darling Grant Achatz. In two weeks, you’ll have all the Chicago news you can handle at chicago.eater.com. Until then a regular dose of submissions from our ticket giveaway for Grant Achatz's book party/tasting event at Astor Center on November 6. 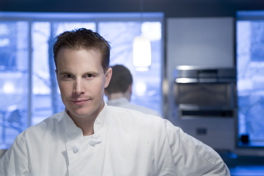 The Ballad of Grant Achatz

They say to pronounce "Grant Achatz"
one must make it rhyme with "rackets".
The cooking's the same,
no matter the name
you find spelled out in press packets.

But what if his name were "Atch-etz"?
There still wouldn't be a catch. It's
yet true that his fame
no one can now maim,
not e'en critics with their hatchets.


Had I a ticket, I'd ne'er pawn it;
my bragging rights would so rest on it.
This poem has been lame.
I'll better my aim
now that I'm switching to a sonnet:

He left C Trotter in less than one year;
went West to Yountville to serve with Keller.
Four years in that kitchen destroyed his fear
and learned he the grape in Jota's cellar.

From where came this Mozart of cul'n'ry art?
From Michigan, near Canada. He may
in family's diner have played a small part;
his genius found bloom while at C. I. A.

To our wolv'rine's travails we can't be deaf:
Death's crabs did try to claim from him his tongue.
Lingual loss is mortal to a fine chef;
far worse than taking from a tenor his lung.

But kicked he cancer's ass, to our great joy:
now Food can still have her sweet Wonder Boy.