At a press breakfast tomorrow at the Astor Center, the Michelin Man, Jean-Luc Naret, will announce the composition of the 2009 Michelin Guide for New York City. As is the tradition at the red book, included restaurants are awarded zero, one, two or three stars, the last of which is internationally considered among the highest honors in restaurant rankings. Simple inclusion is a serious achievement, too. With tomorrow will come the full list of restaurants, along with lots of commentary on it here and elsewhere. Oh, but, hey: how about we reveal the two- and three-starred restaurants right now? UPDATE: Screw it, we'll give you the one stars, too.

With thanks to a high-ranking Eater tipster who smuggled us camera phone photos of an embargoed copy of the guide book:


Now, some insta-commentary. The big winners have to be Masa, Momofuku Ko, Adour and Gilt. For Masa, recognition as the finest sushi restaurant in the land is a long time coming; it has previously ranked two stars and has three this year for the first time. The two star debut for Momofuku Ko lends the venue a fuck-off legitimacy that's going to send Chang haters into a real meltdown. At Gilt, the restaurant at the Palace Hotel and prominent Gossip Girl season 1 location, a hat tip is in order for Chris Lee, who can now be said unequivocally to have turned the restaurant around from its early days in the hands of Paul Liebrandt. And at Adour, Michelin's soft spot for Alain Ducasse isn't a secret; but while not a surprise, this will be quite good for business at Ducasse's new high bar in NY, which has been received less warmly by stateside critics. Check back in the morning for the full list of 2009 Michelin honorees and plenty more color to go along with.

Update: The one stars, up now! But. Is the sky falling? Where is Babbo? 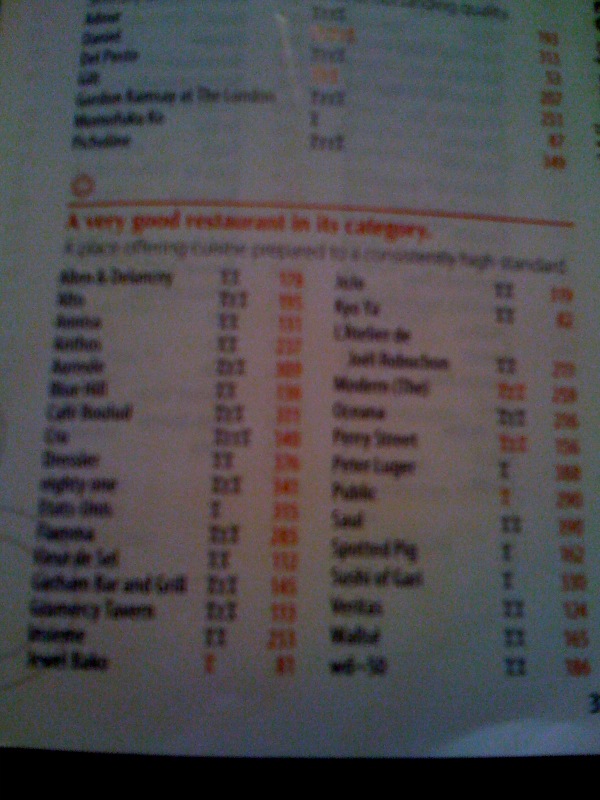