One Year In: Bobo

Share All sharing options for: One Year In: Bobo

Bobo has probably had one of the most interesting, at least in the eyes of the media, first years in recent memory. First off, it's a beautiful space with a major following among the sceney and the trendy Manhattanites. But add in some downright disappointing early reviews, three (that's one, two, three) chefs, and a not so minor tiff with the community board, and we have quite a story. But one year in, Bobo is transforming itself into a new entity. As owner Carlos Suarez attempts to maintain the restaurant's status, he's also trying to coax in everyone else in the neighborhood (and on the island) with his new ex-Radius chef Patrick Connolly, a new, accessible, downstairs menu, and some community outreach.

Would it be fair the say this year has been a little bumpy? CS: It's been amazing, but sure it's not been...not everything I guess went to plan. But I could have never imagined the amount of fun, the challenges, the people involved, the people that I've met. Any surprises? CS: The response from the neighborhood has been amazing.

Were you not expecting that? CS: Well I felt confident that what we were trying to do was create a sort of a home away from home, somewhere that's comfortable, convenient, exciting, but in a residential setting. I felt that over several years leading into '07, a lot of big box restaurants were opening up, and I saw this as an appropriate response. 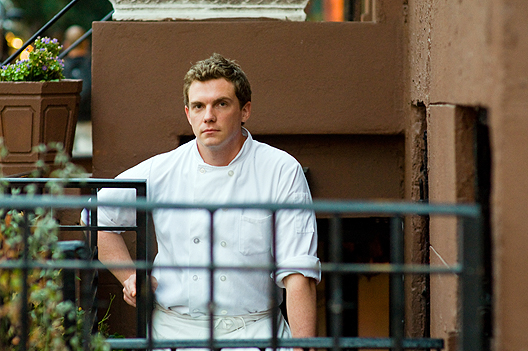 One major aspect of your year was the striking turnover. What happened there? CS: It's just been an evolution. Things continue to improve. Every time we've made a change it's been for the better. It's super exciting to have the opportunity to work with someone like Patrick. But both times you changed chefs, was it because of the same kinds of issues? CS: Well the opportunity to work with Patrick doesn't come along often if at all. It's a very unique, special opportunity.

But before that. Way back, when you had you first chef [Nicolas Cantrel] turnover? CS: Sure. I'm definitely open to hearing criticism but I think each change has been reflective of an opportunity that was presented to us.

Patrick, with you coming in, what changes are you planning, what have you already made? PC: Let's see. Well, we separated the upstairs from the downstairs. Downstairs has a much shorter menu. We plan on it not changing as much, staying consistent of a price point. A little more soulful, more pub-style food, for lack of a better word. Upstairs is already stylistically switched over a bit. When I got here it was maybe more Italian as far as the menu, I think it's a little more of a lighter French-inspired menu. And it's certainly the first time Asian ingredients have been used in this dining room.

Would a regular here before recognize the menu? PC: They have come. They would recognize it. There's a signature technique, but the food had to adjust to the setting...You want your mother's touch, your father's touch, in addition to being elegant.

When you come into a place as the head chef and it already has a set menu, already has a following, is there something you need to be careful of? Are there dishes you know not to take off the menu? PC: I would imagine generally speaking yes, but as far as I can tell there wasn't anything here where they were so upset when it was gone. CS: Upstairs at least is extremely driven by the seasons. There was never a dish that had been on in an exact consistent fashion for a long period of time. The menu continued to evolve with the seasons.

Any major changes we should be looking forward to? PC: I'm just going to roll with that for a couple weeks and let downstairs just kind of take. Because it's still the same kitchen executing two different menus for two different dining experience in the same restaurant. We need to work that out in the kitchen. Once that's running and everyone's comfortable with that then...

CS: You know we're only ten days into the second menu...it doesn't happen automatically. How's the transition been then? CS: It's been great. PC: But there have certainly been changes. On day one it was like, this is not really going to work or this dish has too many steps to it. We want food to come out of the kitchen for downstairs "boom," it should just happen without a lot of concentration.

And personally, how do you take critiques from both the mainstream press and the online reviewers? Do you take them into account when working on your menus? PC: Sure. What I want is the critiques from most of the people who I know and respect and I know they're going to shoot it to me straight. When I've done development for this menu with Carlos at my house before I came here, I had friends that had worked not necessarily in restaurants but in the restaurant community, pretty learned diners, and they would be like "This is horrible" or "This is great. You should do this." Every single bit of that I take in and every bit goes toward nailing it. You didn't ask this, but people in New York are a bit more outspoken about food than people in Boston. But it's nice. You have to be self-motivated in Boston, be your own harshest critic. And here we do the job for you. PC: Here people have a lot to say about a lot of things.

As far as the restaurant goes, any other tweaks you want to make in the next year? CS: The den menu downstairs is about 99% there, so it's just working on the logistics of the kitchen, the sequences of service. And downstairs, promoting it to the neighborhood. Getting the word out that it's a walk-in, accessible, more affordable spot. Because over the last year they've grown to know the restaurant as reservation only, fine dining, and this is a dramatic opportunity for the neighborhood to come on a more casual basis. The prices will be lower then? CS: Significantly. The burger's $11, the chicken is $16. The most expensive dish is $18 and the bulk of the menu is between $8-14. It's a dramatic opportunity for people to come and experience what we're trying to do here at a more reasonable rate.

Is this all due to the economy or was this planning long before? CS: This was something I started talking about as we opened the restaurant, revisited it in January. The opportunity to work with Patrick was exciting for a long list of reasons, but one of them was his experience at Radius, where there's a significant bar menu as well as the high-level menu.

Speaking of the neighbors, I know you guys have had some trouble with the community boards recently. What happened there and what did you have to do to get your license renewed? CS: Back in July, some of the neighbors voiced complaints about noise. Obviously they've been living there for many years and it essentially took sitting down and discussing their concerns, our realities, and finding compromises. Obviously the July meeting is the one that caught your attention. Yeah, when they had the "Say No to Bobo" placards. CS: But there was less attention in August when we came to an agreement and they spoke highly of the collective compromises that had taken place. Really the hope is to be a leader in the community. We've reached out to PS 41. We hosted an event called Futurehood there. The idea there is to raise money and awareness to build a green roof on the top of the school. We've also established a relationship with Andrew Berman, the president of the Greenwich Village Preservation Society. We're meeting to discuss other ways that the restaurant can be a leader in the community.

Anything, if you could do it over again, you'd do differently? CS: I only got around to hiring a GM in January. Would have loved to been able to afford him or know him at the opening. Through all the challenges and experiences, one hopes to grow.

Any plans for Bobo the sequel? CS: We're still working on the den, but you'll see a lot of opportunity in the next six to eight months. We definitely have our eyes open to the real estate opportunities that are available. The price will come down, and there will be a lot of restaurants, ah, becoming available. Like that Sheridan Square space around the corner. CS: Taken. We'd love to have their roof but that's about it. Right now it's all about the burger.
· All Installations of One Year In [~E~]