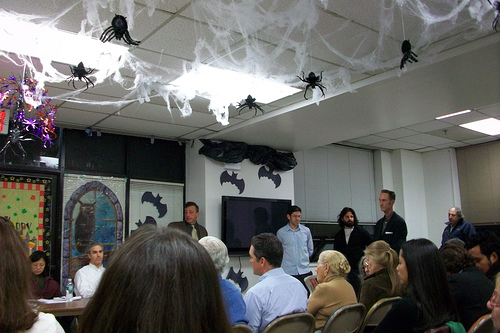 It will be a surprise to, oh, no one, that last night's CB3 SLA Licensing Committee was quite the scene. There were protestors, placards, sob stories, and even an appearance by one Mr. Simon Hammerstein, owner of the embattled The Box. He came away a winner, but a number of others (Klimat Bar, Spice) did not. A full report:

1) First, the renewals: The Box, Sidewalk Bar & Restaurant, Dallas BBQ, and Supper all had their license applications approved, despite various accrued complaints over the past few months. The Box in particular had a tough time explaining that it was in fact a cabaret and not a den of sin, with both the property's landlord and Freemans' landlord defending the club against charges as varied as improper noise control and "a dead girl being dragged out of there by an ambulance at 4:30 am."

2) The proprietors of 146 Orchard—soon to be developed into a "restaurant" after a complete building renovation—came under scrutiny when it was revealed that they wanted to close at 4 am. The site was previously host to a bar, and one committee member likened the application to "a bar becoming a bar." No, no, assured the owners' lawyer, it's a bar becoming a restaurant. "It's going to be like 'Inoteca," the future manager said, and here the NIMBYs in the audience broke into the dreaded NIMBY laugh, that sarcastic "ha, ha, ha," that actually means "you are a disgraceful liar." Regardless, the license passed 4-2.

3) A couple of un-built restaurants, including 6AB on E. 6th Street, and an as-yet-unnamed location on E 1st St. near 1st Ave. got the green light, while longtime tapas fixture Xunta had to file some additional paperwork. Also approved was a transfer of license from the now-defunct Summers Bar on Clinton Street to an English-style pub and restaurant, as well as new Korean spot Persimmon's wine license.

4) But not everybody went home happy. The owner of Klimat Bar on E.7th St., in particular, did little to appease area haters while applying for an upgrade to a full liquor license. After a resident of an apartment above the bar started to tear up while describing how he couldn't open his windows because of the noise and because of the smoke and because he has emphysema, proprietor Peter Koziej couldn't help but crack a grin. Oops! Immediately everyone in the room began to boo and shout taunts. Koziej wiped the smile off his face, but it was too late: denied, with nary a vote in his favor.

5) Spice Thai Hot & Cool, the latest venture from the owners of the wildly popular Spice on University Place, also came up bust. The protesters—all 38 of them—came prepared: visual aids galore, a series of prepared speeches, and a thick stack of petitions. They told endearing stories - one man, Vito Gentile, explained how "back in the day you'd smoke in bars, and when they closed you'd take a girl home and get laid. You didn't stand around outside talking about it." Laughter. "Well let's make a compromise," said Spice's lawyer. "We'll close at 10:45 pm and serve only beer and wine." He continued: "You know the SLA [which has final say] will approve a beer and wine license, and then you won't have any control over the time. We can close at 4 am if we want." The license was denied.

6) Reps for a couple of projects were asked to come back later after consulting the community. The first project, the 4-story Casa Mezcal at 86 Orchard Street, was truly baffling: a combination bar, Mexican casserole restaurant, gallery, art workshop for youth, cinema, and concert venue. Another project, this one at Canal and Ludlow, involves Chinatown's first upscale bed and breakfast/Welsh tea house/pub, The Ludlow Inn. Two passive-aggressive neighbors kept the debate going, and finally the community board asked the owner to meet with the community to come up with some stipulations.

7) The final applicants were Chef John Keller and his partner of the soon-to-exist U O, located at 151 Rivington. "It's about seasonal," said one. "It's about healthy," said the other. "It's about New York City." After clarifying their menu as "sushi-inspired," their wine license was approved and the meeting adjourned.
—Paul Caine
· First Word: Gansevoort Roof, Soho Park and More "Denied Unless" by CB2 [~E~]