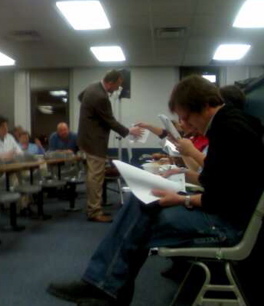 Despite the short list of applicants this month at CB2's SLA Committee meeting, the public session still managed to drag on for four long hours last night. But Bouley wasn't the only interesting applicant. Let's take a look at the docket:

1) God Save the King, the applicant at the Gansevoort Hotel, held over from last month, returned to present more detailed plans for their enclosed retractable roof. After hiring an acoustics engineer, among other endeavors, the applicant devised a structure made of layers of plywood, lead, and polycarbonate to attempt to cover high and low tones. They also agreed to have no dance floor, and to close on Sundays. Nevertheless, the committee resolved to deny the application unless they meet their list of stipulations, and, as committee chair Ray Lee said, there are "quite a bit," as they were concerned about the enclosure, the possibility of a cabaret license, and the revised certificate of occupancy.

2) The longest presentation of the night went to SoHo Park, whose application for a full liquor license at a proposed new seven-table sidewalk cafe did not go over well with the community. The problem? Those pesky french doors. "French doors" and "French windows" have come under scrutiny by the Community Board recently, thanks in part to the joint everyone loves to hate, Delicatessen. The owners admitted that they were "worried that some of the anger towards Delicatessen would spill over onto us."

SoHo Park, however, had a host of its own unique problems, including a DJ whose loud music disrupts neighbors. Members of the community and the committee alike wondered why a sidewalk cafe needed a full liquor license instead of just a beer & wine license. Zella Jones, the chair of CB2's Sidewalk Committee, spoke against the applicant, adding passionately, "Close the damn doors!" Others called SoHo Park "a menace to the neighborhood" because of its viral effect - once one opens, three more follow suit.

Following the pattern of the night, the committee denied the applicant unless they agreed to make the DJ quit at 11 p.m. on weekends, close their French doors at 10 p.m., assure that the outdoor heaters in their garden were legit and the staff completed the required safety training.

3) The old Dragonfly space made an appearance towards the end of the night. The owners, who also own Red Bamboo on West 4th, are changing the name of both their corporation and the restaurant to Red Bamboo. The committee denied them unless they agreed not to change the method of operations -- should they agree, this is essentially an approval.

Other notes: On the Delicatessen front, Ray Lee mentioned that there is sure to be a big turnout of opposition to Delicatessen at the full board meeting this month. Things have gotten so bad there that neighbors aren't complaining about music or crowd noise so much as they are, yes, the clinking of plates. The owners have proposed to build a retractable awning to help appease the masses.
— Reporting by Noah Adler
· First Word: Bouley Overcomes Major CB2 Obstacle [~E~]