Share All sharing options for: From the Eater Lounge: "Tomato Man" Tim Stark

Throughout the Food & Wine Festival this weekend Eater welcomed bloggers, journalists and food world personalities to our lounge at MILK Studios. As the peeps pass through, we chatted them up and spit out the dialogue here in this business. Today we have some remainders from the Eater Lounge. 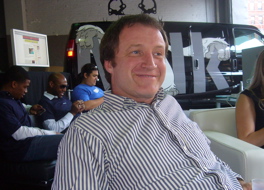 What have you been up to for the festival? Well I'm still in the middle of harvest season, so I just had time for this Heirloom Tomato dinner at Scarpetta with Scott Conant. It's getting into mid-October, but he did really well. He still made them taste good.

I was going to say, isn't tomato season over? We had a light frost, but really this is perfect Indian Summer. Maybe this weekend we'll have a frost but I expect we'll be eating great tomatoes through the end of October.

So, don't take them off the menu just yet? No. That's a problem. Sometimes chefs will stop writing heirloom tomatoes into their menus on October 1st, and I have to say "No, no! We'll have them all month."

When the season is finally over, then what? I'd like to start writing. I'm kind of burned out with the farming. I farm all summer and write all winter. It works out well because come spring I'm burned out with the writing. My last book was all about tomatoes and came out in the height of the season in July. I think for the next one, I'll try to write about some farms other than mine and the whole future of farming in the United States. But you know, I actually would like to take my mind off farming. Even my fiction writing is about farming. I wanted to be the next James Joyce and I'm Johnny Tomato Seed.

What are your thoughts on the idea of Celebrity Farmers? Is there a chance for Top Farmer? I don't know. Rock star farmers? I don't know if I would be. To maintain and to stay in that public eye would be difficult. I often marvel at the chefs. They're so busy in the kitchen and they still maintain that face. Even for my book, it was hard to make appearances. That said, I guess I would be the one, since I do do that whole thing. Being in the public eye has been what made my products sell so well.

How will the changing economy affect both restaurants and then you as a farmer? The economy worries me because I'm about to buy a farm and people are saying that if the economy tanks the value of the farm will decrease. I hope it won't be so savage.

But a lot of the values that are resurfacing in all the restaurants right now, they're depression era values. Subsistence. After the depression people didn't want to pick their own beans, because they could now buy them frozen. We going away from things that are instant now. If you want eggplant parm that you heat up, you can do that at home.