From the Eater Lounge: iCrave

Share All sharing options for: From the Eater Lounge: iCrave

Throughout the Food & Wine Festival this weekend Eater welcomed bloggers, journalists and food world personalities to our lounge at MILK Studios. As the peeps pass through, we chatted them up and spit out the dialogue here in this business. Today we have some remainders from the Eater Lounge. 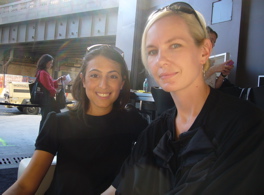 Siobhan Barry and Leah Mendelson, the partner and managing director of iCrave, the restaurant design firm behind the new restaurants at the JetBlue Terminal among many others, came by the Eater Lounge over the weekend. Now that JetBlue is finished (it opens to the public at the end of the month), the team is moving on to design a STK in Miami and a Sushi Samba in Vegas.

All well and good, but really, what's happening in NYC? SB: We are working on a concept in the old Lotus space. We're starting construction in the next couple weeks, so we can't go too in depth.

When's the opening? LM: It should be opening in the spring. It will have a restaurant on the ground floor and a club in the basement.

Will it have those striking structural elements like the Jet Blue terminal? SB: Actually, no. This is a bit of a departure for us. One of the themes is de-materialization. We keep describing it by using the word gossamer. Something that's barely there.

Anything else on the docket? We're working on Cellar Bar in the Bryant Park Hotel. We just did fashion week tents for the W hotel, and we'll do it in the spring. That was fun. It was a different sort of project for us.

Top five restaurants in New York: LM: For me, if Landmarc closed I would be really bummed. SB: I love craft. LM: I love all of Mario Batali's restaurants, but I would be especially upset to lose Babbo or Lupa. Tia Pol as well. And if Sushi Samba closed, I'd be really sad even though they're a client. SB: Out in Brooklyn I love Marlow & Sons and Dressler. The one place I go to every week is Moto. It just has the feeling that it's always been there.
Photo: Mendelson (left) and Barry (right)