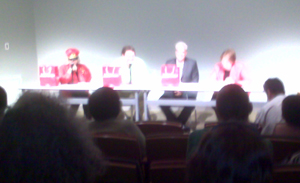 By the end of the day we'll have wrapped up most of the past weekend, but first, this. If you missed Everyone's Talking About Food and Restaurants - But Who Do You Trust?, a panel discussion led by the Zagats, you missed Tim and Nina plugging zagat.com no fewer than 10 times and, even more spectacularly, an unhinged Gael Greene, who shared the panel with Eric Ripert and Cutty. The Insatiable Critic, while interrupting everyone on the panel at least once and Ripert six times, shamelessly and repeatedly pushed everything she's ever done, from her 40 years at New York to her website. (You also missed her, days after posting an opening night review of Corton, minutes after declaring herself 'both a blogger and a critic' riding bloggers for their reckless early reviewing.) But all that was a sideshow to the quotable Gael Greene. On Geoffery Zakarian: "Geoffrey is a chef who doesn't like to cook, I guess." On Mario Batali: "I don't know what Mario is up to these days. Maybe Gwyneth does?" And on a question posed to Eric Ripert instead of her: "Perhaps you should ask Little Red Riding Hood instead of the wolf." Later, said fellow panelist Josh Ozersky on the whole mess, "well, you know, it's like when they finally caught Son of Sam he was on his way to a discotheque with a machine gun." [EaterWire]