Share All sharing options for: From the Eater Lounge: Pat & Gina Neely

Throughout the Food & Wine Festival this weekend Eater welcomed bloggers, journalists and food world personalities to our lounge, The Eater Lounge, at MILK Studios. As the peeps pass through, we chatted them up and spit out the dialogue here in this business. Today we have some remainders from the Eater Lounge. 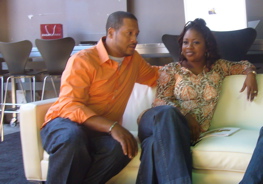 Lee's a wolf. PN: What I really appreciate and respect about him is, when Tony [my brother] and I went to South Beach, there are so many people down there that are so passionate. After running our restaurants for 20 years, it's amazing to see kids with such passion for food. Gina and I do so many things in Memphis, we were just so excited that Lee is taking this opportunity to enrich and bring to the forefront quality of food.

PN: We were, I guess, small celebrities in a small way in Memphis from our restaurants. Best ribs in Memphis in 1996, we've done things with Al in Memphis. But to come to New York and be so well received...we were in the hotel lobby, and these kids that were four and six years old, they said, "We know them, we watch them every Saturday with Daddy." It's amazing. In New York, people are genuinely happy for you.

The great thing about this festival is it gives fans direct access to genuine celebrities. PN: You like to do that. Gina and I are still new to this world of television. We're just regular people. Also, the event gives to such great causes. Gina and I always gave back, in Memphis, with our restaurants. We sell a barbecue nacho at the stadium. We sponsor kids every single NBA game. GN: We look at it as a responsibility to give back.

With the rise of celebrity chefs, chefs have a harder time actually cooking and being in the restaurant. GN: You definitely miss it. We were in the restaurant every day. Sometimes on a Friday we'll show up, really surprise our customers. It's hard to give that up, cause that's how we started. We still cook at home. We try to do the same things we used to do. PN: One of the biggest disadvantages is, before February, I got up every morning, put on an apron and pulled ribs out of the pit. But we've gained so many other things. And you know, it can be disrupting to the restaurant to go back. Paula can't go back to her restaurant. She has so many fans. But yes, we still cook meals with the cameras off. GN: We have two daughters, so we have to keep things normal for them.

Your girls' favorite dishes? GN: Shelby likes the broccoli cheddar cornbread. PN: In the summer it's so hot, they like light dishes like grilled fishes. In winter, it's pork chops, soup, chili, hearty meat on the bone type dishes. GN: Stick to your ribs dishes.

Have you found any good places in New York? GN: We went to Sugar Bar last night. PN: We're true Southerners, we need collard greens, macaroni and cheese. You can get all that there. We're just figuring out New York now. GN: I just started eating sushi on the road. I'm learning all about it. I'm getting very adventurous. PN: And I'm going to the concierge asking, is there a place that makes cornbread? Corn on the cob? But each time we come to New York we've gotten more and more comfortable. GN:Where was it that we went, what was the name of that place? It was amazing. All Asian, samples of everything. Buddakan? It was amazing. Everything was so good.

PN: We went to Blue Smoke on Friday. The baby back ribs, the fried chicken were delicious. Even the worst barbecue in Memphis is pretty good. Blue Smoke, those guys, Danny Meyer, they have it together. We should go back and eat again without everyone else. GN: They really fed us, it was too much. PN: It was really—you know what? New York is alright.