From the Eater Lounge: Tom Colicchio

Share All sharing options for: From the Eater Lounge: Tom Colicchio 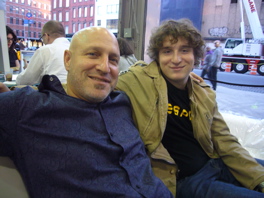 You just came up in a panel about chefs and whether or not it is important for a chef to be cooking in the kitchen: As I was saying [when I announced my new concept] that day, a lot of people are making a big deal about how a TV show and multiple restaurants takes you away from the stove. But just being a chef takes you away. People have to accept that as a chef, you can't run an efficient kitchen if your head's in the stove all day long. I am in my kitchens all the time, though.

How's the fest going? I hit the Burger Bash Friday and that party right afterwards, and then I took the band to the Spotted Pig.

Burger Bash. What did you think of Katie Lee Joel's burger? I can't comment. I didn't taste anything. I only got to try what we were making.

And the DailyCandy gig. How did they rope you into performing? It isn't your regular band, right? No. Becca, who does PR for me, sings for the band Milton, but she just had a baby. Pavia [Rosati, of DailyCandy] asked Becca to ask me. I said, if Milton backs me, I'll do it. We had about three rehearsals. I could have done something by myself, but it would have been much harder and I really wanted a tight band. I was scared shitless going in there, though.

You've never done a show like that? No, never. I've played a few times before people but one of those times was at a pub in Ireland. Never on a stage in front of an audience like that.

Tuesday Dinner launches next week. What's the status? I've been working on it for awhile and we have the menu sorted out. I plan on spending all Monday and Tuesday prepping it. We also added Wednesday just this week. A private party canceled at the last minute so we called up people on the waiting list.

A one time thing? Yes, just because of the cancellation.

But the menu's ready? We're close. The main items are all there.

And you're still planning on doing it the full year? I cleared the calendar for the year, every other Tuesday. I think every chef dreams of a little romantic place where you cook every night and you control everything, where you shop for everything and pick the wine list. That's what it was when I started.

And what about the economy? Has the restaurant industry been feeling it yet? We had some cancellations recently and people are trying to work the price a little harder. We all anticipated a change, but it's been okay. It's not drastic, not doom and gloom. Sundays and Mondays are off, but the rest of the week we're okay.

Would you lower prices? The wrong thing to do is to cut quality. The wrong thing to do is cut corners. You can buy tuna for $4 a pound or $13 a pound, but you can tell there's a huge difference. That said, we're serving hangar steak now. It's still excellent meat, but it's more affordable. And Craft is well situated, because it's a la carte. You can split a first course. You can get one protein and a couple of sides. You can easily get out with $40 a person and still feel that you're having a fancy meal. And we still have regulars that are coming three or four times a week.

Sort of like what it is for a younger person on a budget. Order one pasta, one glass of wine. I'm 40, and even I can't handle all those courses—it's too much sometimes.

Favorite five restaurants in New York, places you'd be devastated if they closed: I live right here, so I usually go to Barbuto. It's a block and a half away. Spotted Pig because it's four blocks away. I like Terroir in the East Village. Dell'anima, again in the neighborhood. And Scarpetta. I have to go to 14th Street, which is kind of rough, but I've had a couple of amazing pastas there.

Photo: Tom Colicchio with his son, hanging in the blogger lounge