From the Eater Lounge: Marco Maccioni

Share All sharing options for: From the Eater Lounge: Marco Maccioni 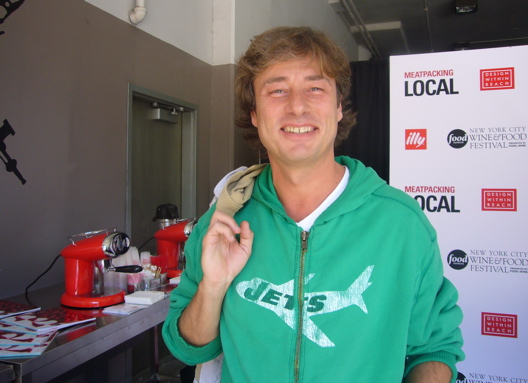 How's the festival been going for you? Yesterday we were on a panel. We did "The Line at Le Cirque." It was all the guys that have worked at the restaurant. Geoffrey Zakarian, Terrance Brennan, our pastry chef, Dieter Schorner, Mike Lomonaco. David Bouley was supposed to be there. But really that's just panel number one. We've had so many people work for us. Rick Moonen, Francois Payard, Daniel, Andrew Carmellini. But Mike, Bouley, Zakarian and Terrance were all the original cooks. There was just three doing the line then, and now we have eight to nine doing the same covers. We call them the Dream Team.

We heard there were a few protesters at the event for Terrance Brennan: They were protesting Wild Edibles. I said, "Oh God, what did my father do this time?" We've had our share of protesters in the past. it's part of the game.

Hitting up any other NYWFF events? Unfortunately our schedules are busy. My dad is watching one door, I'm watching the other, while my brother is off at a conference in Italy called Les Grandes Tables Du Monde. It was formed by Paul Bocuse and other gods of French cuisine. Over the years you were accepted only by your peers. We were accepted in 1984, and now it's stretched to us Daniel, Le Bernardin and Thomas Keller here in New York. This year it's in Rome at La Pergola. Last year it was in Cannes.

And what do you talk about? Basically it's networking for these guys. Anything from 'how's business?' to 'You got a chef for me?' That's the most important part. I can take any of these guy's recommendations blindly, because most of them are owner chefs. They have serious apprentices that need to be placed. My father believes that after five years, you have to change a chef.

It's also good to see what your friends are cooking. Back in the 70's and early 80's we used to get in the car and cross all of Europe. We would visit his friends and each time my father would steal a little something.

And what's going on at Le Cirque? We're promoting our wine lounge. We started it in the spring, and that menu and offering fell perfectly for the economic times. We don't have to rearrange anything. Also, it's a way to tone down the perception of exclusivity that we have. Younger diners are afraid of crossing that threshold of Le Cirque.

So you wouldn't lower prices at Le Cirque. You know, a lot of people are asking what we're doing with the economy the way that it is. But at a restaurant like Le Cirque, we can't lower the quality. The costs to us are actually going up. You have to stay your course. Ferrari doesn't cut their prices. In the good times, you're really having a good time, and in the bad times you have to be smart. It helps that my father has so much experience. He's seen the assassination of Kennedy, the fiscal crisis, the market crash, and 9/11. It's a cycle.

How's your new project going? We're working on a restaurant concept with the Beekman Hotel on the east side. The contract hasn't been signed, so superstitious Italians that we are, we can't talk about it too much yet. We basically have a mutual understanding that something good can come out of the Beekman, especially the terrace bar. But they don't have too much fire power up there, so it will be a lounge with the kitchen and dining room downstairs.

Favorite five restaurants in New York, places where you'd be devastated if they closed. I'll start with Scarpetta right over there. Then God, I would be heartbroken truly—well I was heartbroken when it first closed—if Sushi Seki closed. It used to be Sushi Hatsu, a take your shoes off, old school traditional sushi place with low tables. I lived above it when I was 16. Rosa Mexicana on the east side is just wonderful growing up food. I do have to say I love the Spotted Pig. It's perfect. My brothers and I wanted to build a restaurant that was the anti- Le Cirque, and that's it. And then, I love Wallse. I love Falai. That's another anti-Le Cirque.