From the Eater Lounge: Seamus Mullen and Yann de Rochefort

Share All sharing options for: From the Eater Lounge: Seamus Mullen and Yann de Rochefort 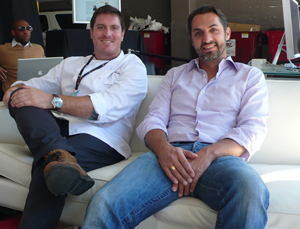 Thanks for coming by, gents. So, let's get right to the what people care about, Boqueria Soho. How's it looking? SM: We're three weeks out. Hopefully we'll be open right at the beginning of November. The space looks gorgeous, we're really excited.

How does Soho differ from Boqueria 19th Street? SM: The biggest thing is that we've got an open kitchen here, with a marble bar around the kitchen We'll have big seafood displays, right on the bar itself, a whole case of fresh shellfish. Plus, there are two planchas in the kitchen, one for meat, one for fish...

At 19th Street, we've been playing with a base menu, plus the market menu, which changes every day. So, we've done about 400 variations on that menu and we're going to pull heavily from that in Soho. The approach is going to be the same, though: high quality ingredients and simple preparations...

In Soho we'll have a bigger kitchen, we'll get to play with the immediacy of food, which is really what tapas is all about.

We're also going to have a burger in Soho...

...It's still a little bit of a secret as to what it'll be, but it's definitely going to be very straight forward. We're psyched about it. We'll have our own blend of meat, cooked on the plancha...We're playing around with 4 different cuts of meat, and it's all about the ratio [of cuts], how you salt and grind the meat and bring the cuts together. [At Boqueria] we'll salt before grinding, then grind again once the meat is blended...I really like using the plancha for the burger. On a gas griddle the meat tastes like gas, there's too much char, and it doens't cook evenly. The plancha is the best way.

Did you catch the Burger Bash? Any favorites there? SM: I missed the bash. But I love the Burger Joint burger—it's my favorite in the city. For a good burger, you need a little firmness when you bite into it. Then it has to melt in your mouth a bit. The bun has to be little caramelized -- you want the bun to have the have the same amunt of give as the burger, know the bun is there as a buffer for the meat...You know, Harry at Harry's Water Taxi also has a great burger.

...But [Katie Lee Joel's burger] it wouldn't be my style burger. It's funny, all this interest in burgers over the last 8 years. I think we started by taking the burger into the stratosphere, making them as complicated as possible. Now, the key is to do it as simple as possible. It's about the purity of the burger. Should be a thin patty burger, cooked quickly, be very careful about how you salt the meat...

The Burger Joint is my style of burger.

And on 19th Street, and at Suba, everything good? SM: Yes, we are very lucky. We've worked really hard to keep prices affordable. YR: Business is up from last year. Really haven't seen a downturn. SM: As bad as the last year has been, next year is going to be worse. And I think people are going to be looking for value...and fun. We've got a great neighborhood crowd, people that come back every week.

YR: There's a huge local regular crowd. I really think we've created sense of community in restaurant. People come in an sense that. We really try to take care of people, get them table as quickly as we can. SM: It's really important to be grateful.

Beyond Boqueria Soho, what are you thinking about next? YR: We're looking at a number of things. Boqueria has been everything that we hoped and more. There's a lot more that can be explored. There's a lot more that can be done with the immediacy of tapas, a lot of things we want to do with the concept. On the culinary side, maybe our own line of cured meats, our own food line.

Any neighborhoods in particular you're looking at? SM: We definitely want to go to a neighborhood with a good residential base. I love the West Village. Maybe a small wine bar take off on Boqueria.