From the Eater Lounge: Lee Schrager

Share All sharing options for: From the Eater Lounge: Lee Schrager 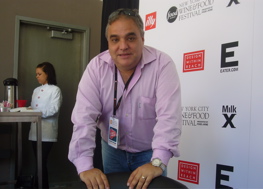 So it's the second day of the big show, what are your plans? Well tonight is the third night, if you're counting the Chelsea Market event on Thursday. Today I'm doing some demos, I'm doing a dinner with Paula Deen, I'm doing Sweet, then the Macy's Afterparty...

Sweet seems like the place to be tonight: Last year it was a great event and this time we've sold over a thousand tickets. After Burger Bash, it was the most popular party. And it allows you to go out to dinner and have a drink and then come by for dessert. Samantha Ronson will be here. Who knows about Linsday, but she flew in. And downstairs you'll have the best pastry chefs in the world.

So, how did Thursday night go? It was everything you could want. It was crazy. What's interesting to me is we didn't think New Yorkers would be as awe struck by the talent. It was like Paul McCartney was there. Bobby thought it was because he was handing out burgers, but people were after him long after he finished serving

Bobby told us last night that he served 2,000 burgers. I had that burger and it was delicious, with those chips on top. And to think they put out so many. And it's an amazing space. I've been wanting to do a party just like Thursday night since the moment I walked into that space.

Alright, time to talk burgers. The big bash last night. We know the winner was Katie Lee. But, what was your take on who was cooking the best burgers, where the crowd was gravitating, where the buzz was... I don't think it would be fair to say. I never walked up to any booth with or without Rachael that didn't have people at it. They were friendly, and they wanted to talk about their burgers and really promote what they were doing. And we couldn't have asked for a better setting.

Speaking of the setting, why did it take so long to get to New York? And how did you get all these venues? I didn't want to be at the Convention Center, I didn't just want to be in a building. I don't build events around venues. I build venues around events. I didn't want to look at a ballroom. I didn't care if it was October. I knew that if we were going to launch new york in the right way, I needed a venue for Burger Bash that was exciting, that was glamorous, that said New York City. I've been doing events there for 30 years. The party last night at the Tobacco Warehouse was the most excited I've ever been about at party.

Same goes for the spot for Sweet. It's so New York City. I walked into it and said I love this [the former Tunnel nightclub]. And the Pier...beautiful site...It took so long to find the right location. But once we found it we just went. We raised 3 million in 10 weeks in this terrible economy. Money was easy. Location was hard.

...and 300 cases of wine poured last night. Is that what it was? We made sure there was enough for every person to have a whole bottle of wine. Coming back to the hotel leaving the Daily Candy party, and seeing the Meatpacking District so jammed, I was so happy. David Rabin told me he hasn't seen the streets that busy in a long time