From the Eater Lounge: Michael Schlow

Share All sharing options for: From the Eater Lounge: Michael Schlow 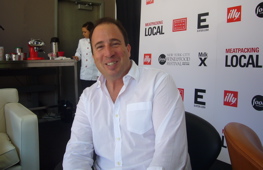 So Burger Bash. we thought you couldn't come. Last minute, I got called by CBS to make an appearance, and I had to change my schedule. I literally broke my fast Thursday night and flew down here.

Going into this, you are the reining champion The fair way to say it is I won the last Burger Bash, since this is the first time it's in New York.

So Katie Lee Joel won last night, which I will call something out of nowhere. I think she would call it that too. I think we all have a preconceived idea of what a good hamburger is. Some people like thick burgers, some like sliders. Her's was a patty melt. I tasted it and it was delicious. I didn't have a bad burger last night. And I think the set up gave her a disadvantage she was all the way in the corner, along with Eater.

Yeah, we were in a destination spot. So tell us your top five from last night: In no particular order, Katie's, Tom Colicchio's burger, Adam Perry Lang's burger from Daisy May's, I liked Michael Lomonaco's burger, and Art Smith. Those were my top five.

Surprises? No. What I do when I come to New York is I'll go seek these restaurants out. So I'll go to BLT Burger and try it out. They're all good. There are no Big Macs out there.

How do you remain objective after 8 or 9 burgers? That's the problem. It's like a wine tasting. It's almost unfair to have people try all these burgers. The first five taste better than the last five, because your palate gets tired. We should come up with something. You know at an olive oil tasting you'll have an apple and at a wine tasting you'll have bread? We need a perfect thing to cut through the burger. Maybe it's a martini...I had a vodka as soon as I left

I also think that next time there should be award categories. You should have a panel of judges and have a judges award and a popular award. Restaurants like to have bragging rights. And I should say this, burger sales are through the roof at Radius. They're 30% of my lunch business.

Any chances of a Schlow Burger in New York? I would consider it. I'm from here and my family is here. I'm the only one in Boston. But Boston has treated me really well. I would consider an Italian restaurant or maybe a burger place. But New York has so many great Italian places.

I think last night, New York being the epicenter for the country in so many ways, they all put their best foot forward. And people who say oooh Katie, how did she win? I've been to her house a number of times, and she is a kick ass cook.

Schrager made the point that she may not have had the chef's chef burger, but she was really into it She sold it. She was friendly, she was in front of her table, people liked her. I asked her before what made her burger so good. She said it's just a patty melt and it has butter and it's greasy. And maybe people liked it because it wasn't a chef burger.

In a room full of burgers, make a melt Yes, a different burger, different approach. By making hers so simply and so tasty, it was uncomplicated and easy to remember. You don't have to remember who used the chipotle mayonnaise.

Give me five restaurants you like in New York. What are we eating?

Five restaurants of any kind where you would be most devastated if they closed? I have 50 I feel that way about. Well certainly, I'm very dear friends with Mario Batali, so any of his restaurants. Number two is any Tom Colicchio restaurant. I would be disappointed if Peasant closed. Another great go to is Gotham Bar & Grill. You are going to get a New York experience if you go there. I would be sorely disappointed if Milos closed down. You know what I had recently that rocked my world? The homemade tofu at EN Brasserie. They tell you when it's going to come out, they give you a bowl of it and its silky and soft and they pour bonito broth over it. It has rock star status.

Anything going on right now? Big thing for me was the opening of Alta Strada at the MGM Grand. It's very different working in a casino. When it's busy it's unbelievable. You do six seven hundred dinners and you just get killed.

Is it just the size? Also, people are more understanding about reservations in a normal restaurant. But here people have shows to get to. And high rollers have to be treated well. But I was so happily surprised by the quality of the people working down there. And I'm looking in Boston at some stuff. With the economy, it might be a good time to look into new projects. Because it takes a year to get a restaurant off the ground. In Boston, business is still good.