Share All sharing options for: From the Eater Lounge: Adam Perry Lang 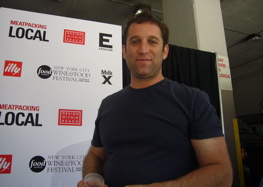 Burgers. Yours sir, is great. Break it down for us.: Chuck is like the body, but sirloin is a depth in taste and brisket is what they call the "gout". It means gelatinous, when ground it really sticks to your ribs. But you don't want too much. All that collagen can be too much. In terms of what I do, I made a chile sauce. I cook it almost like a stew with pork and beef, Texas style. Depending on the acidity, brown sugar and cider vinegar.

Basically it's a chile burger. And I use Jack cheese, black pepper jack. I used it shredded already so when I put the hot burger into it, it melts itself. I use a brioche bun. I like it because it's like challah, but you have to warm it up.

Also, the proportion of bread to meat is really important. First the bread has to have a bite through quality. You should bite through without crushing it and see your teeth marks. And secondly, when you squeeze it between your thumb and forefinger, right where it gives resistance should match the thickness of the burger. And the strength of the gluten in the dough is really important. If it's too wimpy, it disintegrates. If it's too strong, you're chewing on that and you're just left with bread and juice.

Katie Lee Joel won, Burger Joint came in second. You have to give them credit for serving the same burger they serve in the restaurant: They make an excellent burger. But I have to disagree with you there. You have an opportunity to create something that you don't normally get in your restaurant setting. I totally respect what you're saying, but you have a chance to be with all those great chefs and you can show something new.

One thing about your burger is in a sea of burgers, it was memorable. Same with Katie Lee's: She had unbelievable texture. Who doesn't die for a grilled cheese? Before I saw it I was skeptical. I tried it and I said, "You're going to freaking win." It's what Americans look for. Crisp buttery bread, melted cheese. You can get as crazy as you want with chile and whatever but if you don't exceed the expectations you're not doing it.

You call it a burger? Absolutely.

Did you try any other burgers? Not really. I was having so much fun with the griddle. We had a blast. I didn't see what was really going on. I only hope the other guys had the same buzz at their tables.

Talking burgers, top five: When it comes to hamburgers, I'm a skeptic in general with ground meat. I has to have high integrity. Who's really behind it? I love Balthazar. Colicchio is unbelievable. I love Burger Joint. Love the whole concept, love what it does. I really like to cook myself. Outside of New York I love In & Out. And I love White Castle. That to me is a whole other world. It's more of a ritual than a burger. It's steamed, you feel like crap after.

What's going on with your restaurants? Next week I'm going out to a bull auction. And after that I'm off to work with some grass fed products. Just like Americans are gravitating towards hybrid cars, people will be getting into it grass fed beef. I think there is grass fed product that really performs but the demand isn't there yet. I'm going out to Idaho to check out what they've got going on. And I have a book coming out for Father's Day '09, Serious Barbecue.