The curse of Kiev? Since the East Village old-timer vacated the restaurant space on Second Avenue and 7th Street back in fall 2005, it's been nothing but downhill for the venue. Quick recap: American Grill opened in the space last summer, then closed under strange circumstances (above left), opened again, then, in November, went up for sale. Alrighty.

Except? Ready for the surprise twist? In late December, a sign indicating midtown curry joint Go! Go! Curry would take over the space appeared out front (above right). Okay, you might have thought—grill out, curry in. And yet—no. See, turns out Go! Go! didn't replace American Grill. No, no. Rather, it's cohabitating alongside it in what has to be the weirdest restaurant mashup since the Nathan's/Pizza Hut/Arthur Treacher's emporium on East 14th Street. A call to the venue today was met with the answer, "American Grill!" and then a man on the phone declaring, "Now we have curry too!" Can this get any weirder? (Spoiler: yes.) 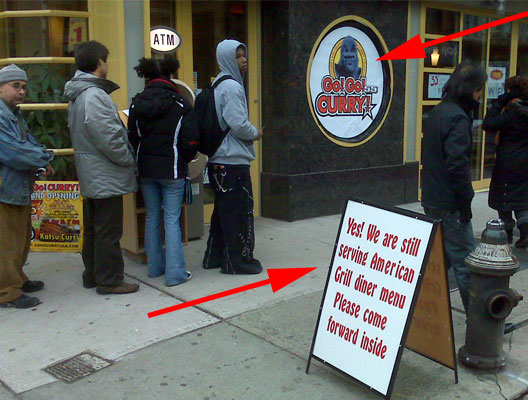 Why is there a line outside of the new Go! Go! Curry that opened in the east village today [Saturday]? (And by "opened" I mean "inhabited the still-warm corpse of that destined-to-fail post-Kiev shitshow American Diner like somekind of Japanese gorilla zombie.")

Because they are giving away free food. How do I know this? Because a homeless woman told me and every other person she passed as she was headed south on Second Avenue. Why didn't i get picture of this line? Because soup kitchen lines and throngs outside of new restaurants are two different things. This one fell clearly in the former. I didn't stop in, but it seemed kind of sweet. Also kind of crazy. Which is kind of how I feel about their curry anyway.

Go! Go! Curry opening pandemonium isn't anything new, but this is certainly a unique East Village spin on the whole thing. And the special deals roll on! According to Go Go's official site, "Most of Curries are only 5 dollars till January 12th!" As for anyone who's experienced this bizarro-world mashup first-hand, we'd love to hear your reports.

For now, we give the last word to another special correspondent, who emailed the above photo, "I thought this photo I took on Saturday might be of interest to you. I presumed Go Go Curry's opening on 7th street would be the end (at long last) of American Grill. Instead, it looks like there's a symbiotic relationship between the two, where Go Go Curry will prop up AG indefinitely. Not sure why Go Go would want to be associated with them, but it may allow the American Grill to keep on keepin' on for far longer than a diner that horrendous should." And somewhere, Remedy Diner starts working the phones.
· Botched Projects: American Grill Back on Market [~E~]
· East Village Miracle Edition: American Grill Opens! [~E~]
· Delayed: American Grill [~E~]