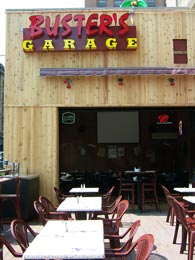 Just when you think the strange saga of Buster's Garage is dead, they suck us back in. Close readers and Tribeca residents may recall that Buster's shuttered its space at 180 West Broadway back in 2006 (right) to make way for a new development, then unsuccessfully tried to reincarnate at 18 Leonard Street, among other Tribeca/FiDi locations. This week, the owners of the rowdy joint roared back from the dead. Per a tipster:

New Year, same as the old. Apparently Buster's Garage has agreed to enter the empty space on the corner of N. Moore and Varick that used to be occupied by something called Divarty's. Everyone is up in arms including the residents of 25 N. Moore, the building that agreed to lease the space to Tribeca's least favorite sports and cheap beer enthusiasts in the first place. Since there are already 5 (or maybe 6) bars within 500 feet, the Buster's people have a waiver meeting with the liquor commission tomorrow (Thursday). I can't imagine this waiver will go forward as everyone in this neighborhood already has a flat screen wider than anything Buster's could install in addition to all the money and connections the fine upstanding folks of the city's richest zipcode have earned/stolen/inherited/hegded. Also, the Buster's folk tried to do the same thing just two blocks down the street and failed on a much less storied block (JFK Jr. used to live right across the street!).

Sure enough, the residents did respond, with over 40 of them busing to the SLA hearing yesterday. We spoke with Allen Murabayashi, the board president at 25 N. Moore Street, who clarified some matters.

The crucial points, per Murabayshi:

1) 25 N. Moore Street is a condo building, so the residents don't have control over the retail tenants. In fact, the building sponsor sold the retail space in early 2007 after it had long sat vacant. This is the space that Buster's wants to move into.

2) Following yesterday's SLA waiver meeting, community members have 10 days to submit arguments to the judge, who would then rule on whether a waiver to the 500-foot-rule would be allowed. If it is, the liquor license application will still need the support of the full State Liquor Authority Board, who could presumably hear the application at a February hearing.

3) Perhaps most mysteriously, what sort of establishment does the Buster's group want to open? It may not be as simple as recreating the old frat boy magic. Before we spoke to him, Murabayshi dropped us an email discussing the residents' position, and what the Buster's ownership group has told the building. His email, in full, below.

4) As for the Buster's folks? In an interview this week with the Tribeca Trib, manager Rusty Schultz denied that the new place would be rowdy: "Look, I'm 40 years old. I'm done with the frat boy crowd. And I wish we had the money for a 70-inch TV."

I am the board president at 25 N Moore St. in Tribeca. 200 Water Group LLC, whose ownership formerly owned and operated Buster's Garage has taken a 15 year lease to open a new "family bistro" in the retail space in our lobby.

Community Board #1 gave unanimous approval to 200 Water at their November meeting to proceed with their State Liquor License application. No residents were informed. We subsequently spent several hours speaking with CB1 and they said that they would consider re-hearing the matter at their first January meeting on or about the 9th.

We invited their General Manager to our last board meeting to explain the situation to us on December 13. The plans that he brought showed a predominance of bar seating, and despite his claims of running a restaurant where "a family of four could get a nice meal for under $100," there were no 4-top tables depicted in their drawing. They had applied to be open till 4am, which was denied—we obviously have a heavy dose of skepticism that a family restaurant would need to be open till 4am.

We subsequently retained Barry Mallin on 12/20, the lawyer that represented the residents of 18 Leonard in their fight when Buster's tried to re-open at 24 Leonard. He indicated that we would typically have 2 months or so before a hearing was scheduled and urged us to put together petitions, letters of opposition, etc. We started to draft these documents as we moved into the holiday.

Today, we were notified that the SLA hearing is TOMORROW [yesterday]. We are shocked that they were able to get a hearing in 22 days, and the whole thing reeks of impropriety.

Any attention that you can bring to the matter would be appreciated.

This is gonna be a fun one to keep following. Count us in.
· CB1 Denies Buster's Garage Liquor License Transfer [Curbed]
· This Time it's Personal at Buster's Garage [Curbed]