The Plywood Report reveals restaurants and bars preparing to open around town. Seen something new in your neck of the woods? Please do let us know. Bonus gold star for sending digital photos, too. Our heartiest thanks. 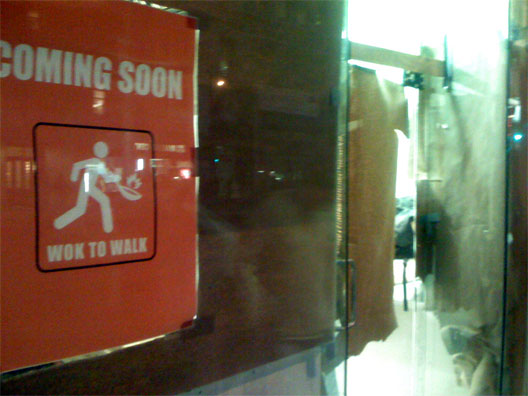 1) Central Village: For University Place, somewhere around East 10th Street, behold the most awkwardly named restaurant since Eat-Pisode and Rice to Riches: Wok to Walk. We're betting on some sort of Asian cuisine, to go. Takers? [PLYWOOD]

2) Upper East Side: The Georgica, a strange cantilevered apartment building rising at Second Avenue and 85th Street, will become home later this month to a new Italian restaurant called Ciaobella. Per an article today in the Sun (via YorkvilleNYC), it'll be the fourth restaurant in the neighborhood from owner Enrico Proietti, who also owns Baraonda, Per Lei, and Bella Blue. [PLYWOOD]

3) Park Slope: West Village vegan restaurant 'sNice is prepping an offshoot on Fifth Avenue (at 3rd Street) in the Slope, according to Brownstoner: "one of 'sNice’s employees told us they’re hoping to be in business before February." [PLYWOOD]

4) Prospect Heights: A tipster emails, "I just walked down Vanderbilt in Prospect Heights. The location that used to be be Half (I never went there) has a new black and blue sign which reads Plan B, subtitled: 'Eat Drink B Merry' still had newspapers over the windows. It's Vanderbilt between Prospect and Park Place." [PLYWOOD]

5) Red Hook: The Feed updates us (via Imbible) on Layla and Bouillabaisse, the Neal Ganick-owned drinking space that we toured during its construction phase back in November. Seems the bar portion, which may open by the end of the month, has been renamed Annabelle. As you were. [PLYWOOD]