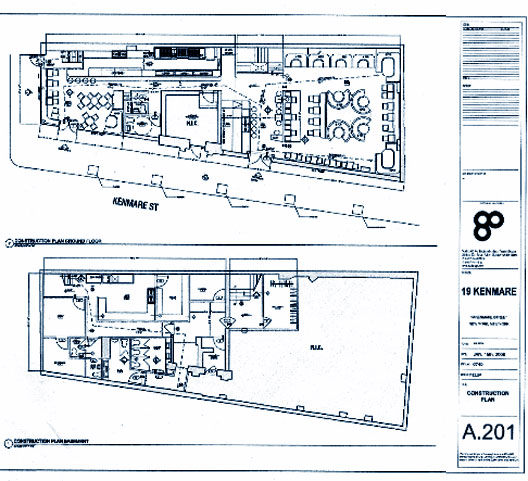 [Brand new floorplans for the space at 19 Kenmare; lower plan is the basement, which will not, repeat NOT, be used for a basement dining room]

Recall Forty Deuce? It was promoter Ivan Kane's attempt to bring his roving burlesque review to 19 Kenmare Street in Nolita, the former home of longtime redsauce staple Little Charlie's Clam Bar—a plan that Kane was forced to abandon last fall after the community rose up in protest. And so the (somewhat awkwardly configured) space sits empty today, plywooded, renovation work half-complete, at best.

But perhaps not tomorrow. A special Eater correspondent reports, "I was at a Little Italy community meeting last night where the owner proposed his plan for a new restaurant in the old Forty Deuce proposed location on Kenmare. He says he plans to maintain a quiet neighborhood feel and will have a side cafe with 'neighborhood prices' and a restaurant next door. He is wiling to make the space soundproof to appease neighbors." The "he" in question here is Chris Eddy, former co-owner of the nearby Barmarché, who has penned a letter to the community making his case for the Japanese-New American restaurant he hopes to open with chef Eiji Takase (ex-Sushi Samba, Omido). He's already made a few concessions, as an open letter to the community makes clear. 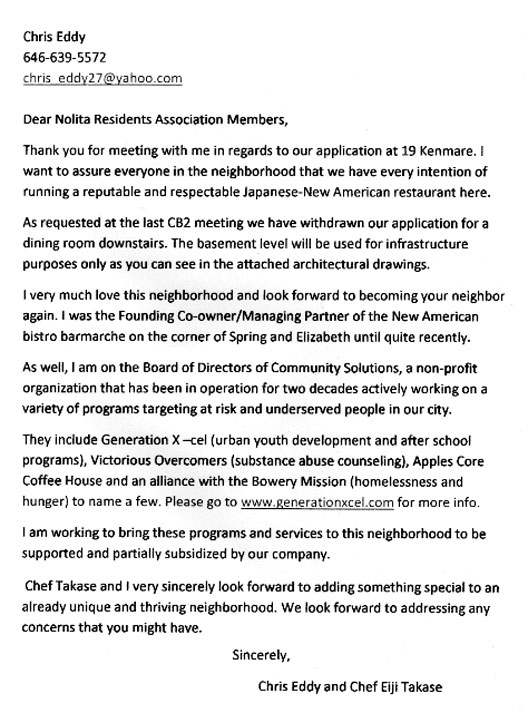 So, odds on this? Eddy, unlike Kane, is a local, which might be enough to get it done. At least, he seems to know the amount of shmoozing involved.

More from our correspondent: "Overall people were happy with it and his willingness to cooperate. This was a community meeting, NOT a community board meeting which is the actual liquor license and zoning stuff. He mainly wanted to let people know they could call him with concerns and he wasn't just coming in to say fuck off to the neighborhood. I believe him because i like barmarche and its footprint in the neighborhood but a few people seemed pissed that any restaurant they couldn't afford was coming in. No vote, but people liked him and as you can see in the letter he has a willingness to cooperate."