Strap in for today's edition of EaterWire. Frankly, we've got more news coming at you here than we know what to do with. 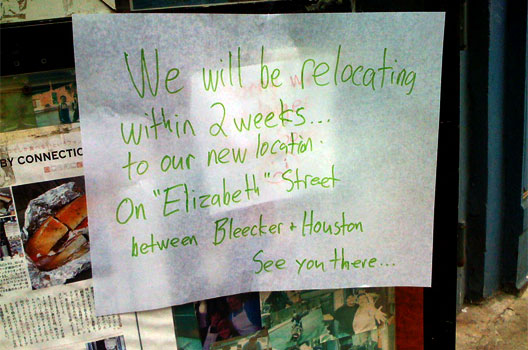 SOHO/NOHO—Following last week's news that beloved hole-in-the-wall sandwich maker the Crosby Connection would soon be forced from its Crosby Street haunt, a special correspondent sends the above image, posted this afternoon. The signage confirms the rumor that owner Joey Cramarossa will migrate a few blocks northeast, where he'll join a block that includes Rice on Elizabeth and Tom & Jerry's. [EaterWire]

TRIBECA—More potential good news on the resuscitation front. Per a tipster, "Jerry Jospeh of Jerry's in Soho is opening his new concept at 90 Chambers [between Broadway/Church]. Gonna be a fast food Asian spot, I believe, called Your Asian. Def not high end, fast food and Chambers Street appropriate." Color this completely unconfirmed, but intriguing; true or not, if Joseph does get back in the game (as he's long promised he would), he's pretty much starting from scratch. [EaterWire Inbox]

MEATPACKING—Finally, file this one under, wow. A tipster emails, "Jeffrey Jah reopened The Inn LW12 this weekend for drinks only. The only signs of 'construction' were that beer lines/taps had been ripped out and POS systems replaced by a simple cash register. Bartenders were selling drinks on a 'cash only' basis and turning away customers showing up for dinner reservations with a lame story about 'problems with ConEd.' So shady." [EaterWire Inbox]