The Shutter reports on restaurant and bar closings around town. We invite tales of destruction in your neighborhood to tips@eater.com. Godspeed to the departed.

1) Hell's Kitchen: Attention restaurateurs. Hell's Kitchen is still a dicey neighborhood to make a go of things in, so if you can't stand the heat, etc. Via the lens of photoblogger WhatISee, evidence of two recent shutterings in the nabe. At left, Japanese eatery Raku; At right, Xing, which looked set to shutter last spring but held on until just before the new year. And, from another tipster, word of one more closing: "Pozzo's Bakery Hell's Kitchen. Does Eater have any clue as to why it closed?" [WhatISee]

2) Upper East Side: Racked had the story of the closing of the Nicole Farhi store on East 60th Street late last year, so it's no huge surprise to report that Nicole's, the surprisingly buzzworthy restaurant in the store has closed as well. Confirms a tipster, "Just walked by Nicole's restaurant on E 60th and restaurant and store are closed. There's a little note on the door saying that they closed as of 12/30/07. Restaurant and store are now empty." [Shutter Inbox]

3) Chelsea: What does it say about the state of the economy when a Ben & Jerry's outpost closes? Perhaps not as much as it says about the general shitshow that continues to be that little thoroughfare we call West 23rd Street. [Crazy Fingers]

4) East Village: Speaking of chains, this reader tip: "the subway (eat fresh! not mta) closed on 1st ave and 14th street, as did the GNC that was right next door. renovations have already begun... fingers crossed it's not a starbucks." [Shutter Inbox]

5) East Village: Imbible has first word on the closure of Upper Avenue A drinking spot Hookah House. Our neighborhood expert adds this color commentary: "Note: this place was Isis Seafood for about two months before the Hookah House name change. Owners are same as Horus House and I guess people didn't want to mix fresh fish with tobacco fumes so they went straight-up hookah. That is all." [Imbible] 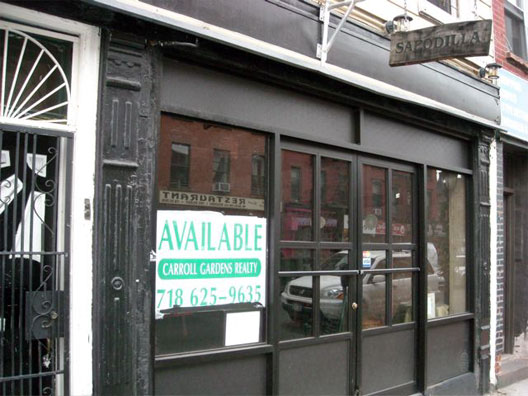 6) BoCoCa: Finally, on Smith Street, word from a special Eater correspondent, who sends the above photo: "Sapodilla restaurant at 247 Smith St. bites the dust." [Shutter Inbox]