WEST VILLAGE—Once again, delays abound at Gusto, where restaurateur Sasha Muniak, beau of CrazyPants Abbe Diaz, is opening an annex of unknown variety (current plan is for a cafe/sandwich type shop) next door to the restaurant at 62 Greenwich Avenue. Muniak has had the space for about a year and just broke ground on construction in November. But what's the hurry? The current delay is a result of a city-imposed work stoppage order. A spokesperson for Muniak explains the situation thusly: "it's a landmark building so they are working with landmarks on permits. i don't have a timeline - you saw how long it took with Centro." We did, indeed. Do slate this opening in for fall 2009. [EaterWire] 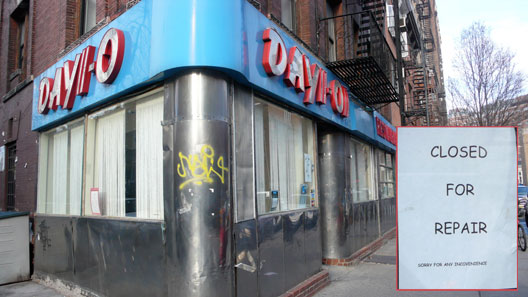 WEST VILLAGE—Further up Greenwich Avenue, problems continue to plague Day-O, which has closed again. It was last closed for renovations in July, 2007 at which time a commenter noted, "We've been trying to figure out the deal with DayO for a while. The last time I went (last summer?) they were severely understaffed and the food wasn't as good as it used to be. Plus they had raised the prices and they had no a/c running. I suspect they may be gone for good this time as they probably lost a lot of regulars during the last extended renovation." Update: we are still trying to figure out the deal with Day-O. [EaterWire]