Adventures in Shilling #014: 'Hope to See It On Eater'

Share All sharing options for: Adventures in Shilling #014: 'Hope to See It On Eater'

There are plenty of restaurants that get their fair share of publicity around these parts. And there are those that don't. Sometimes, we hear about these neglected places via email from alert readers like you. Other times, we hear about them from, well, shills. Let's sort the wheat from the chaff, with these emails received since January 1: 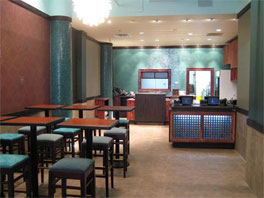 "I walked by this cool space during my lunch break on 7th Ave bet 26th and 27th. I found out its going to be a Pita Grill, but they obviously stepped up their concept. They were not serving food yet (they said hopefully tomorrow) but let me in to look around. It seems like it has a Middle Eastern, rock n’ roll vibe with glass tile columns and tattoo/graphic murals on the wall. I took some pics (right)- it reminded me more of a trendy lounge than a sandwich shop. Probably will do well with the local FIT crowd."
Shill Probability: 2%

"this new south west themed place just opened up on 31 st and ditmars under the train. the area is starting to see a new flux of places to eat. with bistro 33 and others you guys should check them out."
Shill Probability: 8%

"Da Antonio, great food in a crappy setting is moving to a great space in a not so great neighborhood. It will be called Padre Figlio and hopefully the food will still be great. It's on 44th b/w 1st and 2nd and will unofficially open Saturday the 26th with a birthday party for one of the investors. I did see the space and it's very nice. Not sure if people will travel that far for dinner but should do a nice lunch."
Shill Probability: 41%

"There's a new Thai restaurant that just opened up on 27 East 20th Street (between Park and Broadway) called Rohm. I had the green curry and duck salad, and both were phenomenal! I also tried some of my friend's pad thai, which was also very good. The interior is very chic; candle-lit brick walls on one side, concrete wall with inlet gold bar lighting on the other side. The wait staff was extremely friendly, which was a plus. Definitely a place you should check out!"
Shill Probability: 87%

"Wanted to drop a tip on a great restaurant called Tree www.treenyc.com in the East Village, it has great food and the nicest garden in NYC. Gael Green has reviewed it for NY Magazine, http://nymag.com/listings/restaurant/tree/. Hope to see it on eater real soon."
Shill Probability: 100%