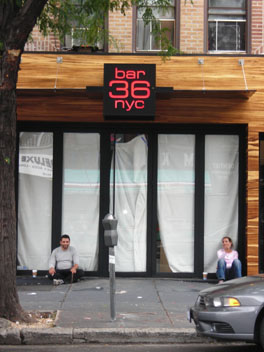 2) Bar 36: A Queens-based informant sends word of two new establishments in Astoria: "i think it's called bar 31 [ed note: bar 36?] nyc, and the signs says it 'mediterannean cuisine.' it's on 30th ave between 36th & 37th. they should be opening within the week. the inside looks really interesting and different from anything else in the neighborhood. hopefully not just another eurotrashy hangout. i put a post on my little hillbilly of a blog (www.griff.tumblr.com). there's also a place a few blocks down, same street, called table 30 ("kitchen and cocktails"). not sure when it opens, but it will be another "fingers crossed i hope it doesn't suck" kind of deal for the neighborhood." 30th Ave between 36th and 37th Sts, Astoria, Queens [Eater Inbox]

3) Prince Street Cafe: Restaurant Girl takes a break from reviewing to file a report on Nolita plywood vet Prince Street Cafe. The eatery, now open, is offering diners casual dishes like sandwiches, burgers and frittatas. 26 Prince is a notoriously unlucky address for food and nightlife establishments, so we're curious to see how well this one will fare. 26 Prince St between Elizabeth and Mott Sts; (212) 343-7310 [RG]

5) Everyman Espresso: The space that was briefly Ninth Street Espresso on 13th Street has officially transitioned into Everyman Espresso. Other than the sign hanging outside the cafe (and, of course, the new owner), it doesn't appear as if anything about the place has changed. 136 E 13th St between Third and Fourth Aves; (212) 674-2470 [Meet the Press Pot] 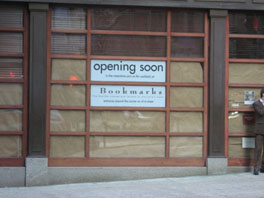 6) Madison & Vine: Nightlife vet Mark Grossich (owner of the Campbell Apartment and the Carnegie Club) is the man behind this midtown restaurant located inside the Library Hotel. The concept here, from the press materials, is "American bistro and international wine bar;" the place is slated to open Monday. The menu will include offerings such as a burger (prime sirloin with cheese served with beefsteak tomatoes, butter lettuce, red onions and Madison mayo on a toasted brioche roll with herb fries), a cobb salad and a Kobe beef club. 299 Madison Ave at 41st St; (212) 867-5535 [Eater Inbox; TONY; Flo Fab]

7) Catch 22: About Catch 22, a reader writes: "New place in W'burg. Looks pretty ambitious for the block it's on. A lot of the same people involved w/ S. Cono Pizzaria which used to be across the street before they bought this new space." 312 Graham Ave between Ainslie and Devoe Sts, Williamsburg, Brooklyn; (718) 782-3199 [Eater Inbox]