We come now to the Week in Reviews, of course. Richman gets us from zero to sixty zero in about two seconds at Monkey Bar, then Bruni files from Soto, which fares far better. Last in the mains, Randall Lane four stars Wakiya for no apparent reason. With the elsewhere comes the Meehan at a first-of-its-kind Japanese curry chain, a comparatively unloquacious Restaurant Girl and Paul Adams in search of English sticky toffee pudding. And on the blogs, we find the last remaining fans of Jewel Bako. 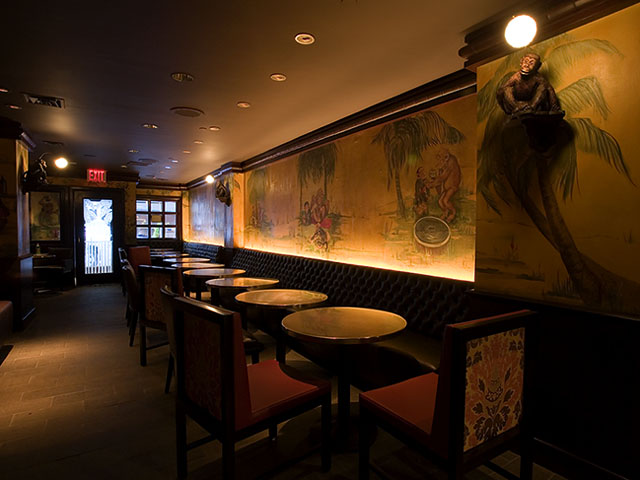 1) Alan Richman reminds us that he's still writing for Bloomberg today with what is perhaps his harshest review to-date, an absolute hammer drop on the recently made over Monkey Bar. It's probably sufficient to stop at, "Will I Go Back? Absolutely not. I can't afford the hotel rooms." But, in the context of the review, that's almost a reprieve. Shall we?

The bar has become an after-work singles spot, roaringly convivial on two of my visits but lacking any sense of importance. The hotel lobby remains spiffy. As for the restaurant, it's worse than ever...It's everything -- a jumble of way too much. Yes, it's ambitious, earnest and colorful. But the dishes are incoherent and the food is thuddingly heavy. No focus. No finesse. Lots of salt...One appetizer includes bananas, jicama, cuttlefish, honey- roasted peanuts and "banana-chili jam." You really don't want that, although the peanuts, the tastiest element, are so good you might reminisce longingly about your last airline meal in coach.

Somewhere deep down, chef Patricia Yeo is one hell of a cook. Perhaps now that she's focusing on this restaurant exclusively, a development of just the last week, she can turn it around. But, given this review, you do want to think twice about it as a destination for six to eight weeks, certainly. [Bloomberg]


2) Bruni is in a better mood than Richman this week, with the former's two stars for Soto, Sotohiro Kosugi's Greenwich Village sushi and Japanese plates entry.

The new theater that he has constructed for himself at sea level in Greenwich Village is minimalist, a white slip of a space with a long maple sushi counter on one side and tables at an even longer banquette on the other...Many of the roughly 30 dishes spread across the first two pages of the menu, one devoted to cold plates and the other to warm ones, are vibrantly seasoned and intricately composed, works of culinary and visual art that make you pause before your first bite and pause anew between subsequent ones so that you can appreciate them as fully as they deserve to be.

All-in-all it's not the sushi but the langoustine 'that’s the triumphant standout'; note that service can be a bit dicey. [NYT]

3) Finally, we have Randall Lane at Wakiya, which gets an inexplicable—in that the restaurant is simply not very good—four-of-six stars. Let's hear it, Lane:

The best dishes were the more imaginative ones (with the exception of an immaculate Peking duck, the skin, crisp as a potato chip, served separately from the sweet meat). Wakiya reverses the very idea of egg fried rice, stuffing the rice into a wonderfully soft omelette, drizzled with briny XO sauce. Spicy, crunchy “golden sand”—panko bread crumbs and toasted garlic—spread over soft-shell crabs gave the juicy crustaceans an addictive, savory crunch...The hefty prices demand such fireworks, and Wakiya is a formidable Chinese experience, even if it falls short of its own boastful promises. Delicious? Sure. “More original and exotic than any other”? Not quite.

Peter Meehan for $25 and Under at Go! Go! Curry, the first American outpost of the Japanese chain, here in the Garment District; Restaurant Girl Danyelle Freeman uses her fewest number of adjectives to date while one-point-five-starring Sea Salt; Paul Adams in Park Slope for English sticky toffee pudding at Alchemy; Robert Sietsema way off the grid at Yeti of Hieizan in Sunnyside; and Tables for Two at Ramen Setagaya, which feels like a 'tiny slice of Tokyo'.

On the blogs, Scoboco quite likes Centro Vinoteca, even on Labor Day; the Gotham Gal reveals her family as the last in New York that still like Jewel Bako; Nosh relives the mid-1980s at Gotham Bar & Grill; NY Journal has two stars for BLT Market; and the Big Apple Dining Guide makes a very good case for deathwatching Knife + Fork.