The Gatekeepers: The Harrison's John Paul

Share All sharing options for: The Gatekeepers: The Harrison's John Paul

This is The Gatekeepers, Season Two, in which Eater contributing photograher Michael Harlan Turkell roams the city meeting the fine ladies and gentlemen that stand between you and some of your favorite impossible-to-get tables. 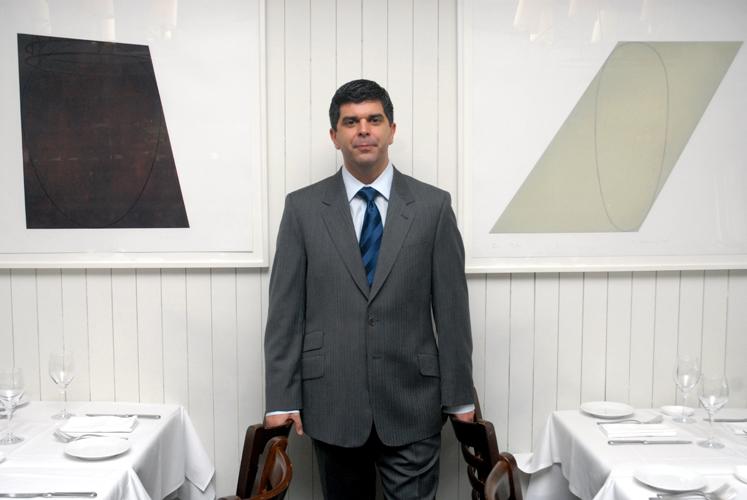 The Harrison opened in 2001, then a product of Jimmy Bradley and Danny Abrams' partnership, now Bradley's outright. It's a neighborhood canteen for the Tribeca set, but also a default for dates, casual drinks and such, especially on the early side. It's not so much that it's an impossible table at this point in its lifespan, but hit it at the wrong (right) hour and your dreams of walking in for an impromptu great meal will be shattered by a 45 minute wait. Plus, those choice seats outside are strictly for walk-ins, which means GM John Paul is an important man to know.

John Paul: We do see a lot of celebrities. If people feel comfortable dining here, we don’t want to give up names. I can tell you this: Mission Impossible 3 (MI:3) tried to have their premier party here, which we turned down.

We firmly turn down gifts/money. We have some big regulars, from financial groups such as, Citigroup, Merrill Lynch, Goldman Sachs, and others, which have dined her 200+ times. There have been occasions of a bottle of wine during the holidays, but as a friendly gesture rather than a bribe.

We do have major stars coming here, many of which live in the neighborhood and we respect their privacy when they ask to “sit over here (out of the public eye)”. Though one time Selma Hayek made a reservation for 7 and showed up with 15. It was hard to keep that private. We also had a celebrity wedding not too long ago. We were bombarded with press (some hiding in the dining room as patrons). I don't usually get star struck, but I’m a BIG Mets fan, and lately we’ve had old and new players have come in, which has really impressed me.

There are 4 tables around the bar that we hold for walk-ins. All 40 seats outside are first come first serve, no reservations taken. Funny enough, the nicer the day, the easier it is to walk in, because we gain 40 seats outside. Easiest time is before 7PM. Late nights are great too, after 10PM. We’re not a big restaurant. We're planning on opening for lunch in October. An affordable highlight is “Sunday Supper” 4 courses priced at $55. We don’t have pairings and/or a tasting menu on the normal menu, but they are available by request. Then there’s the private room, 24 guests max, $1500 minimum for the room (food and beverage cost), but is often booked months, if not a year in advance.