The Peter Luger down slide continues: A rat -- or mutant rat? -- scampers his carnivorous self through the kitchen after-hours.

Tomorrow night Inside Edition will air part two of its "Rat Patrol" investigation, in which the show sends reporters out into the streets between 1 and 4 AM to find rats and other vermin running loose at top New York restaurants. While mice and rats may very well be an unfortunate and inevitable evil of New York food business, these reports are highly compelling nevertheless. It's really never a good time to know that you and your neighborhood rats are sharing food. This time, the show caught blockbuster restaurants Peter Luger, Blue Ribbon, Da Silvano and more with mice and rats running loose in the kitchen. 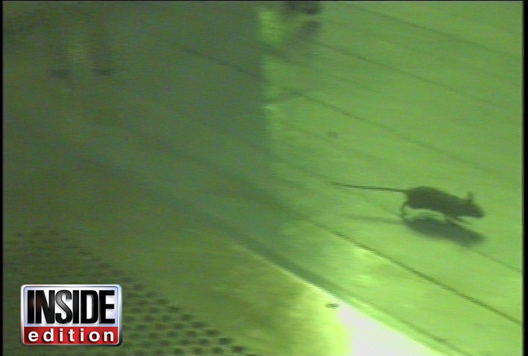 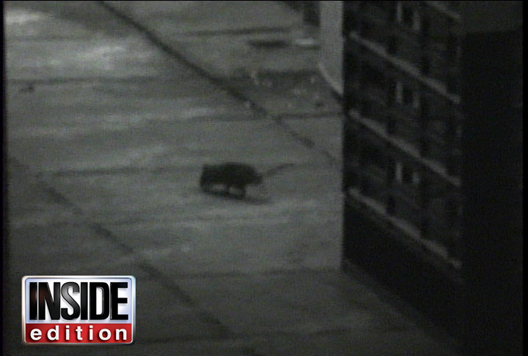 From a press release leaked to us today:

In middle to late August, INSIDE EDITION’s “Rat Patrol” took to the streets of Manhattan between 1:00 AM and 4:00 AM peering their cameras and flashlights into the windows of a wide variety of eateries from fast food places to fine dining establishments. In total, INSIDE EDITION found 22 restaurants through out New York shared one common denominator – rodents.

The report shows mice and rats having the run of the place at the trendy, celebrity hot-spot Da Silvano restaurant. On three separate nights cameras captured rodents dining on scraps that were left on the dirty kitchen floor and climbing over crates of glassware.

The owner of Da Silvano attributed any rodents to nearby construction and recent renovations and says he is throwing out every bit of food in the restaurant.

INSIDE EDITION cameras also caught rodents at pricey seafood restaurant Blue Water Grill, which was ranked by Zagat Survey as one of the top ten most popular eateries in all of New York City. In a written statement, the restaurant tells INSIDE EDITION it has, “never failed a Department of Health inspection?Every measure necessary will be taken to address this random situation?It does not, in any way, suggest an infestation.”

INSIDE EDITION also found rats at one of the world’s most famous steakhouse Peter Luger in Brooklyn. On two separate nights, INSIDE EDITION cameras captured rats strolling through the venerable steakhouse’s kitchen. Inside Edition spoke with one of Peter Luger’s owners who claimed the restaurant is spotless and blamed the presence of any rodents on recent renovations. She said the restaurant has professional exterminators that come on a regular basis.

“Rats this time of year are entering a major breeding cycle,” says Bruce Colvin, a world renowned expert on rodents. Colvin tells INSIDE EDITION, “Once rats infest a kitchen, it can be very difficult to eradicate them.”

In total, INSIDE EDITION witnessed rodents in more than 22 New York eateries including:

Da Silvano, 260 Sixth Avenue (Between Bleecker and Houston) (response above)

Friend of a Farmer Country Café, 77 Irving Place (Between 18th and 19th)

Blue Ribbon, 97 Sullivan Street (Between Prince and Spring) (response below)

Ottomanelli’s, 395 Amsterdam (Near 79th) (response below)

Abitino's owner admitted that they have had a problem with mice in the past but have since corrected it. “Everybody in New York has mice. It's impossible not too. But Abitino's takes pride in the cleanliness of all our pizzeria locations.”

The owner of Yuen Yuen told us he has since caught the rat we saw and plugged up the hole from where it came.

At Pecan the owner said, “Do you think you can come up with a restaurant in Manhattan that doesn't have this problem?” The owner also tells INSIDE EDITION he will address the problem immediately and takes great pride in keeping his restaurant exceptionally clean.

At Senor Swanky's a manager tells INSIDE EDITION, “We have an exterminator that comes in every week. The week that you came [to our restaurant] our exterminator never showed up, so now we have a new exterminator and there shouldn't be rodents any more.”

At Hello Berlin one of the owners tells INSIDE EDITION they have a regular extermination program they stand by.

At Hour Glass Tavern the owner said he was not aware of the problem. He maintained that they have an exterminator that comes every week and any rodents sighted would have to be the result of recent renovations in the building.

At Pongal the owner tells INSIDE EDITION he was not aware of a problem and they have a regular pest control program saying, “I've never seen a rodent.”

At Blue Ribbon the manager tells INSIDE EDITION he was unaware of a problem and has an exterminator that comes regularly saying, “This is news to me.”

At Ottomanelli's the owner tells INSIDE EDITION, “It's a big problem in the city. Sometimes we do see mouse droppings. We put glue traps down and regular traps. We try to control everything as best we can and we keep all of our locations exceptionally clean.”