MEPA—Presented without comment, from a tipster: "The Inn LW12 is making a menu concept change to suit the mass market (fried chicken, spaghetti and meat balls etc.). Andy Bennett the chef at the Inn is leaving. no news on where he is going." [EaterWire Inbox]

SOHO—According to a tipster, that smell coming off of Dani last week was indeed the stink of death: "not sure if youve heard, but neighborhood joint (of sorts) dani is closed. according to their answering machine "for renovations" ... but according to one of the chefs i know (who is now working elsewhere, possibly permanently), 'they dont have any money'... any news?" An angry -- perhaps overly defensive? -- Don Pintabona, owner of the restaurant, insists that the place will reopen on September 17th. [EaterWire Inbox] 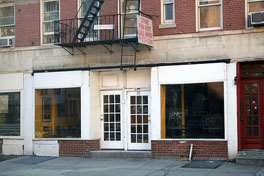 WEST VILLAGE—In this photo taken by Eating in Translation, you can clearly see a for-rent sign hanging above sometimes-open, sometimes-not-open cafe Ametller. That does not bode well for the eatery, which looks deserted because the place was closed on Friday for a staff holiday. UPDATE: A trusted West Village correspondent reminds us that the sign has been there all along, which sounds par for the Ametller course. [EaterWire Inbox]

UPPER WEST SIDE—Remember when restaurateur Charlie Palmer turned his prix-fixe eatery Kitchen 82 into a run-of-the-mill Irish pub? At the time, he didn't want his name associated with the new drink spot, though he still retained the lease on the space. Well, apparently that move wasn't a great idea, because Palmer's gone and sold the lease to the folks who own P.J. Clarke's. So Upper West Siders can probably expect a P.J. Clarke's to open at 461 Columbus Avenue sometime in the near future, though nothing has been confirmed yet. [NY Post]