Share All sharing options for: The Shutter: Dano, Freddy's Place

The Shutter reports on bar and restaurant closings around town. Seen an establishment drop the grate for the final time? Let us know. 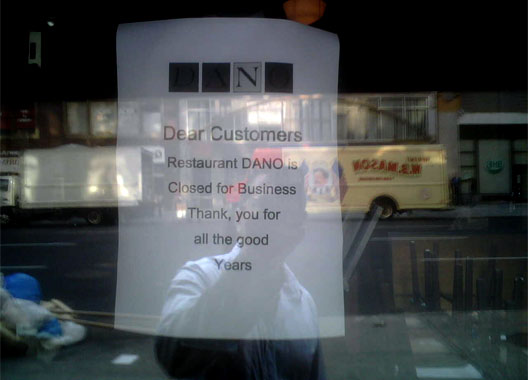 1) Gramurray: A tipster sends the above image, and this note: "Dano, on 5th and 28th, has closed for business, for good. They’ve been closed for the weekend for months now, they do a decent lunch trade when it’s nice outside and they can have the café tables, but there’s no neighborhood or night crowd to speak of. It’s a shame, they had decent (if expensive) food and the only place to sit outside and enjoy a meal on fifth between 14th and 40th street, or so." [Shutter Inbox]

2) West Village: Per another tipster: "Freddy's Place on the corner of Jane Street and 8th Avenue shut its doors down on Sunday." And Chowhound quaked. [Shutter Inbox] UPDATE: Per a tipster and a commenter, we're late on this news: "Freddy Ristorante at 38 Eighth Ave. & Jane St. closed in July and has the windows papered up continuously since then (phone disconnected too)."