Share All sharing options for: Hangover Observations: Eat Out 'O7

Last night was Time Out New York's Eat Out "event," a bonanza of tastings from an assortment of local restaurants. The event was held, as it has been for the past two years, at Skylight Studios on Hudson and Dominick Streets in Soho. The venue was packed, loud and a bit warm—and it was difficult to balance both a drink and a tasting plate while threading your way through the jostling, half-drunk crowd. Yet, we persevered. Here, the takeaway:

1) It was very nice to see some of the big-name chefs actually turn up at the event. We spotted Michael Lomonaco dishing up seafood cocktail with Maker's Mark and orange bitters at the Porter House New York table, and Akhtar Nawab mingling near the E.U. station.

2) Cutlets dressed up. The man was wearing a tan suit, which was the nicest outfit we've ever seen him in. You'd think he was trying to impress someone. 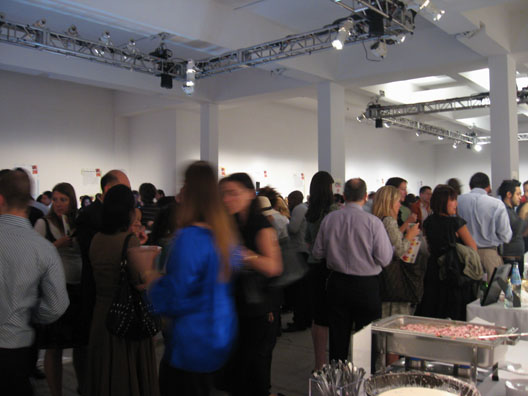 4) The biggest cop-out of the evening had to be The Waverly Inn's dish: little biscuit squares served with butter and jam. We were also irritated to see that they still insist on stamping "preview" atop every menu. Also not thrilling was L’Atelier de Joël Robuchon's tomato gazpacho. Seriously?

5) Cheese purveyors, soy-focused spot Kyotofu, Starbucks, and gelato company Ciao Bella were some of the options in the "Third-Course Terrace" aka the dessert zone. Lacking: a great chocolate table. Overheard, from a guest: "I don't understand why they're serving cheese with dessert. Gross."