1) Firefly: We profess to have no idea as to who is behind new Nolita restaurant Firefly, or what the concept of the place is. A close look at the menu posted in the window reveals entrees like a heritage pork chop, peppercorn-crusted tuna and a roasted lamb porterhouse, all priced in the high 20s to mid-30s range. 54 Spring St between Mulberry and Lafayette Sts; (phone number unknown) [Eater Inbox]

2) Jimmy's Diner: For fans of DOH'd eatery Union Picnic, sad news. The place has officially been replaced by an eatery named Jimmy's Diner. A tipster writes: "I dont know if this has much relevance...but I noticed yesterday that Union Picnic in Williamsburg is now a new place. It had been closed for sometime after a bunch of places got inspected last spring/early summer. A neighbor told me that he had been shut down many times before. The new place looks a lot better and is going by the name Jimmy's Diner." 577 Union Ave between North 10th and North 11th, Williamsburg, Brooklyn; (718) 218-7174 [Eater Inbox]

3) El Quinto Pino: The owners of always-packed Spanish tapas spot Tia Pol are trying to quietly open their much-hyped spinoff restaurant El Quinto Pino way before its publicized opening date. An Eater informant writes: "The space that used to be Matchbox Cafe on 24th between 9th and 10th (closer to 9th) seems to have opened up on Sat night. The cardboard sign on the door lists it as EQP - El Quinto Pino. Seems like a bar--not sure if they serve food. Looks quite nice actually." The place is officially opening Monday, so it may be friends-and-family only over the weekend. 401 W 24th St at Ninth Ave; (212) 206-6900 [Eater Inbox] 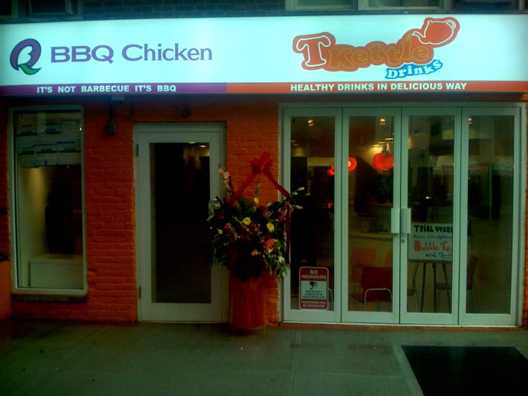 5) Kingswood: New West Village Australian restaurant Kingswood has opened, to interesting first reports. Here's an excerpt from an email we received from an early diner:

Reservations: Six people at 730pm last night. The guy who answered the phone had a hot Aussie accent...Staff: Hot, and only slightly snobbish. With the exception of one lady who I only saw briefly, it appeared to be all male. The maitre'd has a beard and a hat, and he won't like you. He also will block you from passing the bar into the seating area unless you can verify your reservation. Our server, meanwhile, was the perfect level of attentive, and had nice arms.