Share All sharing options for: Week in Reviews: Luger Downgraded to Two Stars

This here week in reviews is a doozy. First we've got the Luger downgrade to a deuce, followed by two bonus old school check-ins. Richman at Il Mulino and the RG at Elio's. Then, Platt crushes Wakiya and Sietsema dotes on BarFry. And that's to say nothing of the Elsewhere and the bloggers. Let's get 'er going, shall we? 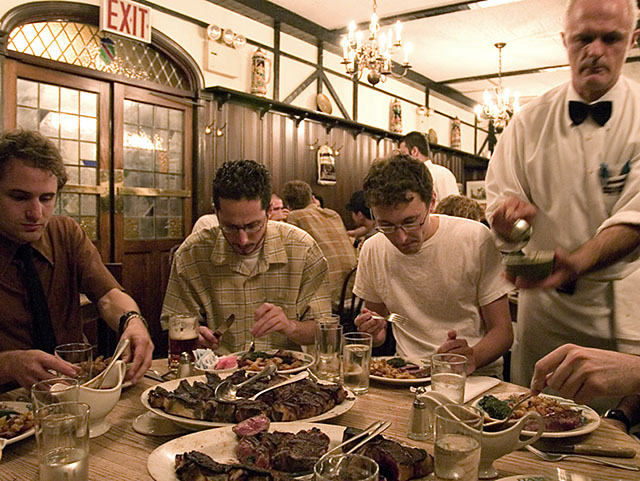 Peter Luger, from the Kalina Archive

1) There will be no rioting in the streets, for Bruni has downgraded Williamsburg legend Peter Luger to two stars, citing a host of reasons why it is no longer fit to be riding around on its three star high horse. Among the issues are service and an unevenness in quality, to be sure. Also, and not insignificantly, Luger isn't as unique or necessary as it once was in the meat kingdom:

If imitation is indeed flattery, then Peter Luger Steak House has cause to blush for the next 120 years. But not to gloat, and not to coast, and I’m convinced that this venerated and venerable New York institution is doing some of both...It’s certainly impossible not to be swayed by the proliferation of steakhouses in New York, so many of which Luger sired or inspired. What Luger serves we can get elsewhere — at Wolfgang’s Steakhouse, Benjamin Steak House, Ben & Jack’s Steak House, Blair Perrone Steakhouse, MarkJoseph Steakhouse — and while it may not be exactly the same, it’s sometimes close enough...We can get it in less brutally illuminated dining rooms and pay for it with credit cards, which Luger still doesn’t take. We can get it in more accessible locations.

The Bruni wants to note as well, "I say that as someone who has loved it for a long time and wants to keep loving it but needs Luger to give me reasons: more consistent food than I’ve had there over the last few years, less dismissive service than I’ve encountered over the last few months." Indeed. [NYT]

Bonus Old Schoolage: Alan Richman is at Il Mulino the venerable Italian restaurant in the West Village—and hates it, basically. There are only four flavors, he notes, "oily, salty, garlicky and buttery." Will he be back? "No. I barely endured three dinners." Burn. [Bloomberg]

Double Bonus Old Schoolage: Danyelle Freeman is at Elio's, the Italian clubhouse on the Upper East Side this week. Two and one-half RG stars is the verdict: "It's the sincerity of familiar classics that comes through..." [NYDN]

2) Adam "Not Oliver" Platt visits Wakiya at the Gramercy Hotel this week and demolishes it with a zero star review. Before we even get to the food:

By the standards of today’s ostentatious Asian-themed dining palaces, however, Wakiya is not that grand at all. The room is a narrow bowling alley of a space, wedged into the south side of the hotel. The window shades are drawn, obscuring the view of the park, and the dominant color motif is black overlaid with shades of gold and bordello scarlet. The walls are stenciled with patterns of rococo tapestry, and curtains of red string hang from the ceiling, between rows of cramped black tabletops. The bar area is also puny, by the standards of today, and if you visit the jet-black unisex bathroom, you will find each stall fitted, baroquely, with a gold candelabra.>

On the topic of the food, the dim sum is good, the rest not so much. "They've taken all the majesty out of it," says one of Platt's dining companions. In a special take-down bonus, the restaurant is listed as having gotten "NO STARS" instead of ZERO STARS, which is the kind of knife twist that makes reading the review worth it. [NYM]

3) Robert Sietsema in an uncharacteristically early review for the man at the Voice visits Josh DeChellis' West Village tempura shack BarFry this week. He likes:

Now Josh DeChellis, the chef at Sumile, has decided to restore tempura to its proper place in the Japanese food pantheon. Located in the West Village, his BarFry replaces the lackluster 50 Carmine, and you won't recognize the space. A severe black banquette extends along one wall, running opposite a bar that dominates the room. The restaurant's interior is tiled in eye-searing white. That antiseptic lack of color, and a menu dominated entirely by tempura, might tempt you to think you've wandered into an insane asylum—but one in which you'll happily be committed.

Also the shrimp tempura is "right on the money," but "Use skanky cheap onions, dude!" [VV]

Elsewhere, Peter Meehan has Timberlake's ribs in a box best at Southern Hospitality; Paul Adams most impressed by the non-sushi offerings at Soto in the West Village; Gael Greene, the Insatiable Critic, is at Accademia di Vino on the UES; Tables for Two is in the West Village at P*Ong, "an appealing marriage of innovation and tradition"; and Randall Lane two-of-sixes midtowner Saju.

On the blogs, Sallivates reminds us about Dieci; Nosh at Geisha, verdict: 'martinis for models'; 'something amiss the minute you walk into Borough Food & Drink, per the Gotham Gal; and Scoboco all the way downtown at Adriennes Pizza Bar.