Share All sharing options for: The Gatekeepers: John Winterman of Cafe Boulud

This is The Gatekeepers, Season Two, in which Eater contributing photographer Michael Harlan Turkell roams the city meeting the fine ladies and gentlemen that stand between you and some of your favorite impossible-to-get tables. 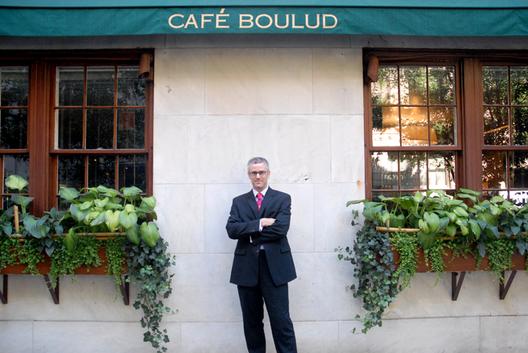 Cafe Boulud, Daniel Boulud's somewhat casual Upper East Side eatery is the proud owner of three stars from Frank Bruni and is one of the great neighborhood power scenes above 57th Street. It is casual as compared to Daniel, which makes it more of a place for regulars, who all know maître d' John Winterman.

John: Monday, Tuesday, and Wednesday are the hardest days to get in here. We get the city's "who's who" from politics and the media. Barbara Walters, Cindy Adams, Mort Zuckerman are familiar faces who have their regular tables. We'll name only a few names. Our discretion is an part of our appeal. The art scene is also heavily represented. While some of it migrated to Soho and then Chelsea, there is still a major core group uptown. We get the Madison Ave gallery owners, the big private collectors, the occasional museum curator and the well known auctioneers from Sotheby's and Christie's. It’s not really a "scene” restaurant, but a place where bold faced names know they will enjoy privacy and discretion, almost like a private club, but a very democratic one.

Friday and Saturday we have a lot of first time guests, the foodies who make this a destination based on our chef's reputation. The common ground is that everyone is requesting the same highly coveted tables. There are 3 – 4 tables that account for 40% of our requests. They are right in front, along the windows, in the back corner and along the back banquettes. Everyone wants 7-8 PM. A lady of a certain age came in asking for one of the aforementioned tables. None were free, and though she was seated, she was visibly upset. Fifteen minutes later, a table by the window opened up, and I moved her there immediately. I often have to explain that there is a difference between doing our best to honor a request and offering a guarantee. But at the end of the day it's all about making the greatest number of people happy. If we were to rebuild I would want more corners and window space to accommodate all our guests and make each and every one feel like someone worthy of Page Six.

When Daniel himself wants a table he calls, as he does for his friends. He never forces reservations on us without notice. Within our restaurant group, we try not to surprise each other with reservations. Only once has Daniel Restaurant called us to get a table in at the last minute, because the guests went to the wrong location. Actually they were supposed to dine at DB Bistro Moderne, which I believe was booked, and we had room so we honored their reservation at the Café. Each of Daniel Boulud’s NYC restaurants is very distinct, but we share a “no attitude” attitude. We work as a family to get people in. There’s always a table somewhere someway.

There’s only one way to “buy a table” here. Come often and become a regular. It’s about building relationships. I still get people that come in and say “I knew Daniel when he was at Le Cirque and Bernard was Captain,” well, that’s over 20 years ago. We’d be making a lot of “I knew Daniel” exceptions since he’s been a mainstay in the city for so long. Whether you’re a bigwig or a first time diner and you want a table by the window, you have as good a chance at any.