Last night was the 14th Annual Autumn Harvest Dinner to Benefit Share Our Strength, hosted by Danny Meyer and Eleven Madison Park. Special guests included Mayor Mike Bloomberg, Diana Taylor, Flo Fab, Daniel Boulud and Dana Cowin. Also in attendance—and, among others, cooking—was Paul Liebrandt, who asked us if we were wearing a wire before confirming so much as that we was opening a new restaurant (he is, next year, as we know). The benefit raised more than $200,000 for Share our Strength. Our observations are as follows:

1) Daniel Boulud has mastered the art of the entrance. His 7 PM on-the-doter into the venue was only bested by his two strolls into the kitchen, one post-service of the second course, the second for bubbly at the conclusion of the event, both timed for max impact and hand shaking.

2) The Danny Meyer service machine does not rest at banquette events. Service quotable #14: "Would you like me to take that glass or fill it for you?"

3) Class points awarded to Danny Meyer for toasting Grant Achatz, who couldn't attend. But, confidential to Mr. Meyer: it rhymes with "packets."

4) Style points to Sam Mason: One for no-showing to stay in the kitchen of his new restaurant; the second for having Daniel ask for him in the kitchen; the third for serving the very best of his Tailor desserts, the Greenmarket Blueberries, Yogurt Sorbet and Black Olive Cake.

5) For the record, the mayor's last meal would be Boar's Head knackwurst. The mayor's least favorite of the Meyer restaurants: Blue Smoke. 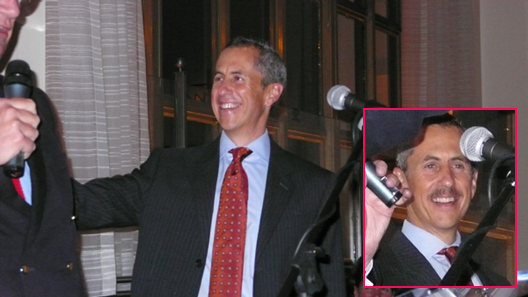 6) Three weeks back from a vacation to Italy, The Danny Meyer was still sporting a bit of an unfortunate mustache (inset). But for a $2,000 donation to his favorite charity, he shaved it on the spot (above). 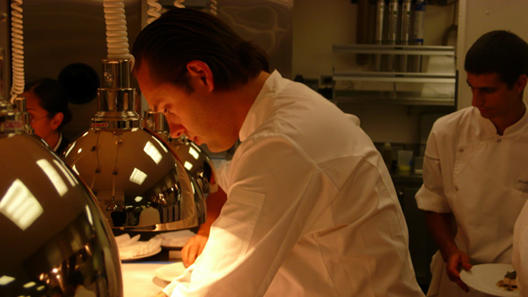 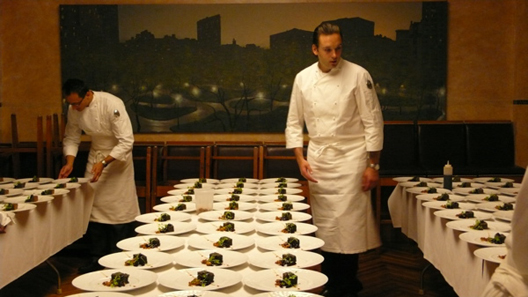 Paul Liebrandt plating desserts for his boys from Tailor.

7) This Paul Liebrandt (above). Dude can cook. If his John Dory with Cauliflower Créme, Roasted Baby Abalone and Velouté Blanc shows up at Restaurant Leibrant, we all win. Also, nice of the guy to help out his boys from Tailor, where he's been and of which he is a fan, let's just be clear.

8) The was talk of slipping Mayor Mike a shack burger before the lamb course. Instead, he got a chopped salad and popcorn. 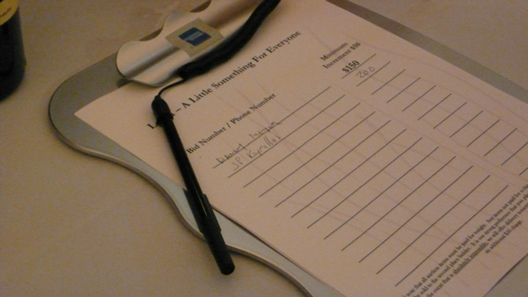 9) Bidding war alert: During the silent auction part of the event, J.P. Kyrillos, Food & Wine publisher went for the same lot, #51, "A Little Something For Everyone," as Mr. Meyer. A sycophantic nod to Meyer's taste or a genuine interest in one of the least distinct lots at auction?

10) Scott Feldman, twit agent to star chefs, was a no-show; in his place was blast-from-the-past, Augieland.

11) The Quotable Bloomberg: "Thanks for your applause in recognition of the smoking ban. But where were you people five years ago?"

12) The Quotable Bloomberg, II: "I thought I was going to be late, but then the line at the Shake Shack started moving." 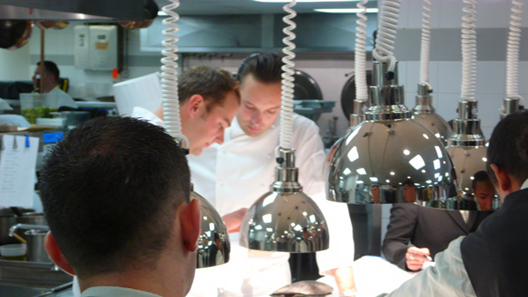