And now, the Plywood Report, offering intelligence on restaurants and bars that are in the pre-opening stage. Seen something new in your neighborhood? The tipline, tips@eater.com, eagerly awaits your call. 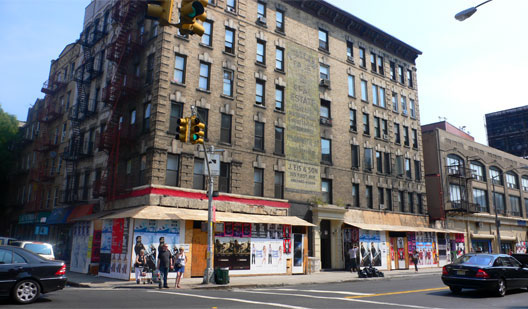 1) Nolita: With all the chatter about Ivan Kane's forthcoming Forty Deuce, we thought the time right to take another look at the place, which can be found on Kenmare Street (above). Two observations: one, this place is freaking enormous. Two, community board kvetching or not, we're nearly certain that this project will happen. It's Ivan Kane, people. Enough said. [PLYWOOD]

2) East Village: A savvy tipster emails, "There's a new restaurant going in on the ground floor of my East Village apartment building, 166 First Avenue. It's directly across the street from Momofuku (soon to be Ko). Previously the space was a failed meatpacking-esque club called Tapis Rouge opened by Etienne Deyans. Before that, it was a similar lounge that tanked. I really think the space will succeed as a restaurant. It's much larger than it looks, and actually has two floors. My landlord told me that the kitchen is going in on the lower level and that it's going to be beautiful. The restaurant is supposed to be traditional Spanish tapas, my landlord said, and that the owner has other restaurants in New York. 'His name is Mario, and he's going to be a great tenant' was the only other thing he said. The restaurant already has a liquor license (obtained sometime in the last month or two). Another tidbit: I saw a waiter that I know from Esperanto, a pan-latin/Brazilian restaurant on C & 9th, lurking outside and generally being a guard while they're renovating the space. Perhaps Esperanto's owner has something to do with it." [PLYWOOD]

3) East Village: Another from the inbox: "I saw work on the inside of the old Porch space on Ave C and between 7st/8st. It has been under renovation forever. Inside, I saw that there were stairs to the second floor and on the back side an upper deck. That means lots of outdoor space in the rear - a pet peeve of CB3. Sorry, I don't have pics, but the doors were closed when I went back over. Any word on what's going in?" [PLYWOOD] 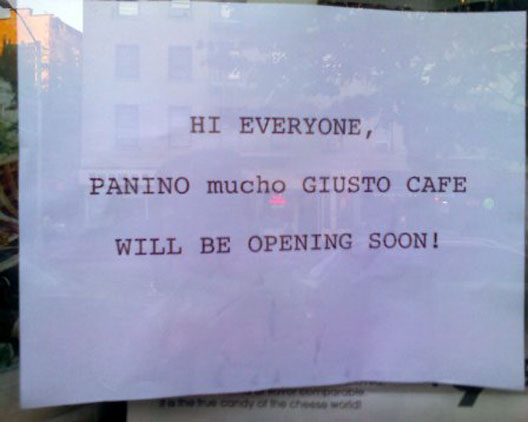 4) West Village: A special Eater correspondent emails the above image with the note, "Looks like West Village coffee shop Panino Giusto will be reopening as Panino MUCHO Giusto." Yahtzee. [PRE-PLYWOOD]

5) West Village: From yet another glorious tipster: "There’s some plywood on seventh ave south between carmine and Leroy on the east side of the street with a sign that says COMING SOON GRAND SICHUAN. Could this be an outpost of the grand Sichuan intl of local fame?" [PLYWOOD]