The Gatekeepers: Alicia Nosenzo of Perilla

Share All sharing options for: The Gatekeepers: Alicia Nosenzo of Perilla

This is The Gatekeepers, Season Two, in which Eater contributing photograher Michael Harlan Turkell roams the city meeting the fine ladies and gentlemen that stand between you and some of your favorite impossible-to-get tables. 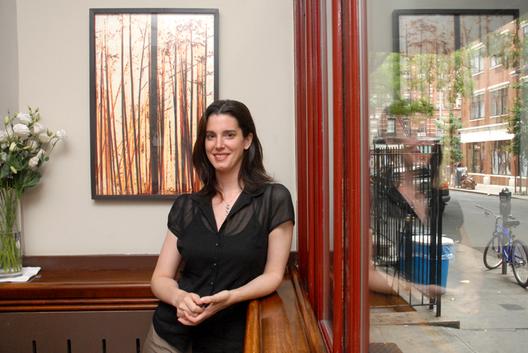 Perilla opened in early May and is at present still the only restaurant owned and operated by a winner of Top Chef, which is a credit to both Harold Dieterle and his business partner, Alicia Nosenzo. In its West Village digs, the place attracts a combination of Top Chef junkies, restaurant junkies and locals—and the place is generally packed. Sure you can slip in at 6 on a Tuesday, but for primo slots, Alicia is a damn good person to know.

Alicia Nosenzo: Once you meet the bartenders, you find the bar to be central to all of Perilla’s action. I can talk to our regulars easier. There are only 10 seats and they are most attractive at the moment because you do not need reservations, and people request and wait for those spots. People eat quicker at the bar, so there is a high turnover. It’s never impossible to get in here though, because we’re always calling our wait list. We will not leave a message, but if you put your name on and you’re around and hungry and we have cancellations.

I was Director of Operations for Beanstalk Restaurants and Jimmy Bradley and Danny Abrams (Red Cat, The Harrison, Mermaid Inn, and Pace). We’re still a tight knit group. Actually, before we opened I did a few wine tastings at Little Owl. Gabriel Stulman (GM of Little Owl) often sends over flow to us, as we’re twice the size. It’s funny, we’re not connected, not the same owners, but many people assume otherwise. More often then not, Gabe and Joey (Campanaro, Chef at Little Owl) come and sit at our bar instead of getting a table.

This is New York, but I’m sure name-dropping happens everywhere. But we actually don’t really get many celebrities and aren’t one of those destination restaurant even though we’re in the middle of everything. No one knows Jones Street, it’s tucked away, and it’s always gets confused with Great Jones.

We have a lot of chefs come in, but we’re not a late night crowd, so don’t expect to see them on Fridays and Saturdays. They come in one their days off earlier in the week. There’s definitely some young women who come in who have crushes on Harold. It helps bring people in, but now we’re proving ourselves with our food and hospitality. Some people come and are really critical, like they’re judges on Top Chef. We are always happy to hear when someone comes in with low expectations and we are able to greatly exceed them.