Today in Launches & Releases we have two new food books, one just out today, Beard on Food, and The Amateur Gourmet, out 8/28. Both are, essentially, on the importance of enjoying food, versus worshiping it, yet are by two very different authors. The first is by the one and only James Beard with a foreward by Mark Bitman; the second is by the, well, one and only, Amateur Gourmet, Adam Roberts, who has won some hearts and tried others at his blog The Amateur Gourmet. Let's have a look at what we've got.

1) Beard on Food: The Best Recipes and Kitchen Wisdom from the Dean of American Cooking: Out today, the book is a reissue of the 1974 classic of the same name, now with a foreward by the estimable Mark Bittman. Per the press materials: "Beard on Food is Beard's selection of his favorite weekly syndicated newspaper columns, combining recipes with culinary history, travel lore and words of wisdom for the home cook." The home cook isn't usually us, to be sure, but this is Beard we're talking about and the book is rather enjoyable. Plus, that it's about food without painting food as something to fetishize gets it listage here. Check out the anachronistic chapter "The Decline and Fall of the Tomato," or the universal, "Barbecuing is an Art." [Amazon] 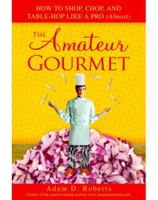 2) The Amateur Gourmet: How to Shop, Chop and Table-Hop Like a Pro (Almost): Now we've known about the AG's book for some time now. It's finally out, as of August 28th, and via the New York food circuit the book is being received well (although, having read it, we have no idea what in the hell Levine is talking about when he says its an "honest gustatory coming-of-age-saga"). Of particular interest is Chapter 8, Fine Dine Like a Professional, with special guest Ruth Reichl. As a special bonus to the food bloggers in the crowd, much of it translates into a food blogging 101 lesson, too. Advanced eaters will find the text a bit sophomoric, but that's the point. [Amazon]