Blue Seats Still Not Open, Slated for 'Definitely This Week'

Share All sharing options for: Blue Seats Still Not Open, Slated for 'Definitely This Week'

The bar at Blue Seats, still empty, despite numerous write-ups indicating the bar has already opened.

The Ludlow Street sportsbar Blue Seats has been on the books since January and has been on the verge of opening for a month now. At the end of July, the PR machine fired up big time and scored a bunch of choice items in places ranging from TONY to Thrillist. All well and good, and quite a nice bit of work for their publicist. Yet, for whatever reason, we still have no idea when the place is opening. The official word on Friday was that it would open today, but today they're calling it for 'this week.' Here, a look at why, now, we'll believe the place is open only when we see it with our own eyes:

July 30th: 'Like the den of your summer house', Blue Seats opening 8/6. [UrbanDaddy]

August 1st: TONY notes that the 7/30 opening date has come and gone, blames it on an unconfirmed report of stolen TVs, provides new opening date of 8/9 the latest. [TONY]

August 6th: Reps say, "They're not going to open today, but they're ready to go. It will definitely be this week."

Below, a non-Blue Seats PR-approved photo of what Blue Seats actually looked like, should you have happened to stop by on Saturday night: 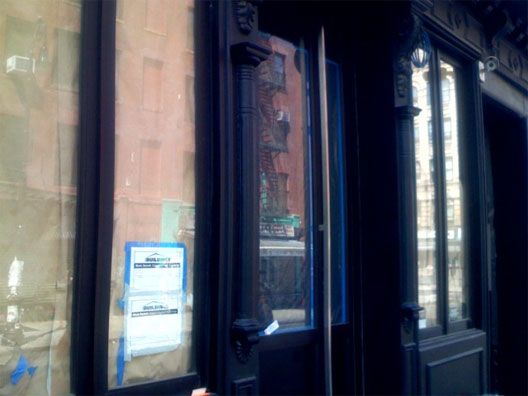