Technical difficulties prevented us from bringing you this here Plywood Report on Friday, like we usually do. The report, a roundup of pre-opening restaurants, bars, and clubs around town, is herewith presented in full as a special Monday morning treat. 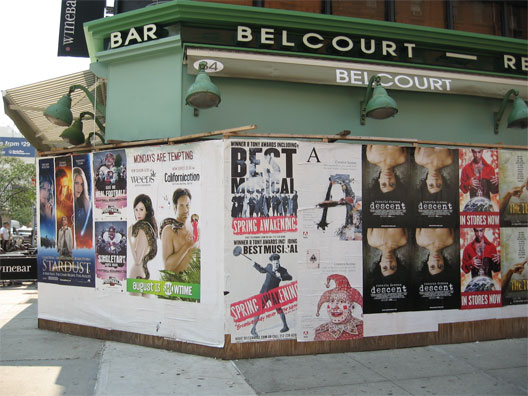 1) East Village: One of the mystery candidates in the Lower Second Avenue Plywood Corridor has been named, per the photo above passed along by our friends at ShiftDrink. Behold, Belcourt, in what used to be the Frutti di Mare space. Intel on this place is scarce at this moment in time; tips appreciated. [PLYWOOD] 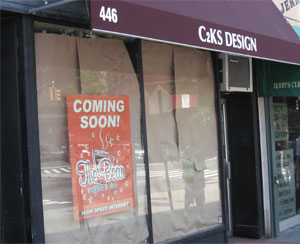 2) Central Village: Another tipster: "Seen today on Sixth Avenue between 10th and 11th Streets. Looks like The Bean is sprouting a western branch (right)! This is excellent news, because even though I think their iced coffee is so-so, their baked goods—and they have a lot of them at their First Avenue spot—are consistently first-rate. My question: can car-heavy Sixth Avenue support a leisurely hang like the one they've established in the East Village?" [PLYWOOD]

3) Williamsburg: A tipster emails a highly detailed update on this Plywood vet: "Re the plywood report from July 3 about a new restaurant on S. 6th in Williamsburg, between Berry and Wythe, between E. River Bar and Dressler—it will be called Viñas and will be serving Latin food. Owners don't have any other restaurants, but just opened a bakery on Bedford btw N. 9th and 10th, according to the worker I spoke to outside the place who was installing really nice weathered wood planks to the exterior wall. They are hoping to open in September." [PLYWOOD] 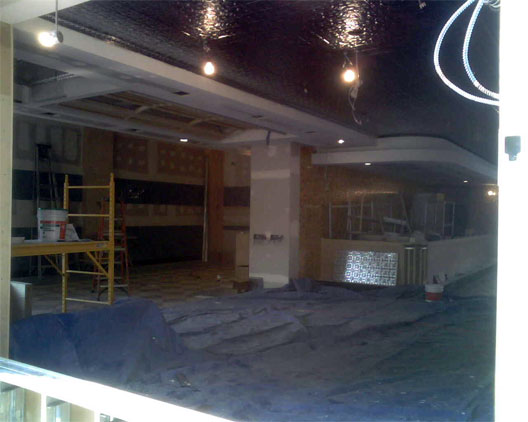 4) Lower East Side: What we see above is Plywood vet Remedy Diner, in the old Petrosino space. Coming along. [PLYWOOD]

5) Battery Park City: "Saw a sign for a new yogurt place in Battery Park City. It wasn't until i checked out your website, that i learned what FLURT yogurt was. They have a sign up on a small storefront, on South End Ave near Rector Place. The store looks almost complete, but there was no sign in the window about an opening date." [PLYWOOD]

6) Murray Hill: "it appears another yogurt place is opening up this time in Murray Hill. there's been plywood up for weeks now but a sign went up announcing berrywild yogurt, which sounds like pinkberry knockoff to me." [PLYWOOD]