Share All sharing options for: WANTED: The Location of Restaurant Liebrandt ($500 Reward)

There is enough credible buzz in circulation to have us fairly convinced that Paul Liebrandt is opening his Restaurant Liebrandt this fall, perhaps quite soon. There was Thorn's sidebar-reveal, then a bit more from Mouthing Off. Plus, if one wades through copious amounts of Flash at PaulLiebrandt.com, one notes that the restaurant is announced on his site for "Fall 2007" (note screen cap). But -- and here's where this goes off the rails -- that's all we know. Liebrandt will not answer our emails or return our calls, and, much more surprising, he's been able to keep the location completely out of the press elsewhere. Frankly, it's driving us mildly insane.

There do exist two theories about where this restaurant will be. 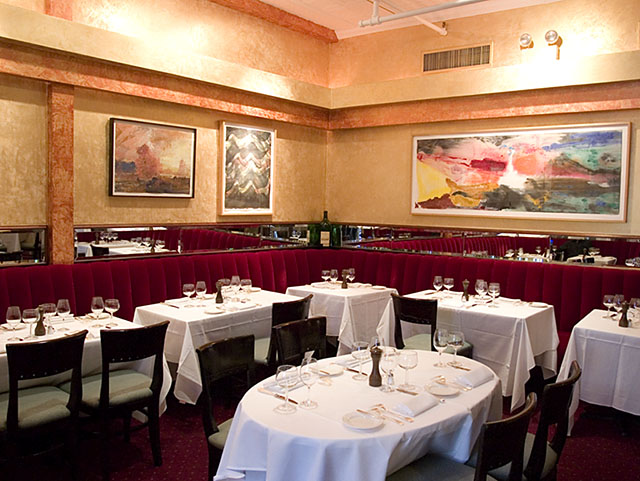 The last known state of Montrachet, from the Kalina Archive.

1) Montrachet: Last we heard, several months back, there was a flutter of activity at Drew Nieporent's shuttered Montrachet in Tribeca. Combine this with the fact that Big Daddy Drew and Liebrandt have for moths been widely rumored to be collaborating and you've got Credible Theory #1: Montrachet will reopen this fall, remade as Restaurant Liebrandt.

2) Uptown: Because it will pimp a bigger reveal we're lining up for you down the line, we're not going to divulge our source on this one, but here's Credible Theory #2: Restaurant Liebrandt will be opening uptown, somewhere just off Fifth Avenue. This does, certainly, jive with the assumption that Liebrandt will once again be making a four-star attempt. After getting BruniBashed at Gilt and retreating to Europe to cook for the royal family of Monaco, he's back for in New York, out for blood.

We're sorry to say that these theories are more educated guesses than actual intel, which brings us to the point of all this. Eater is offering a $500 cash reward for the first person to send us the address and an interior photo (cell/iPhone snaps acceptable) of Restaurant Liebrandt. Think not that we are kidding; contest ends the second the location is revealed here or elsewhere. And now, we wait.
· Restaurant Leibrandt? [Thorn]
· Countdown to Restaurant Liebrandt [Mouthing Off]
· Paul Liebrandt [official site]