It's been quite the week of destruction around these parts. And so, to the gallows once more, with another edition of The Shutter. 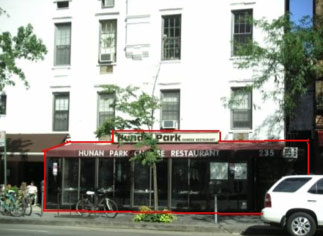 1) Upper West Side: We begin with a special pre-shutter alert. "The era of the $7 entrée is rapidly passing on the UWS," a tipster emails. Sure enough, the Hunan Park at 235 Columbus (at 71st Street, right) is up for lease via Walker Malloy. Restaurateurs looking at the ($54,000/month) space, please be aware: "No Wine Bars, Italian, Japanese, French, Turkish or Hamburger Restaurants." Meantime, the restaurant remains operational. [Shutter Inbox]

2) Astoria: To Queens, now, where we've got a serious neighborhood crisis on our hands: the beloved Le Petit Prince Patisserie bakery has served its last baguette, as a commenter on Roving Gastronome confirms. Not good times. [Roving Gastronome via Joey in Astoria]