EaterWire: The Royalton Gets A Facelift & More!

Share All sharing options for: EaterWire: The Royalton Gets A Facelift & More!

MIDTOWN WEST—We've got a midtown mystery on our hands. An informant writes: "i work on 44th street and the royalton hotel has been closed for nearly a month. just passed by and peeked into the lobby and talk about plywood, this place was gutted to the bone. asked a guy who looked like he worked there "the who and what" was happening and he said the entire hotel is getting a face-lift, new restaurant, bar etc...what's the scoop?" Well, the hotel is getting a complete overhaul by Roman and Williams. As to the restaurant and bar, they're obviously closed for the reno, but what will open in their place remains unknown. Inside scoop, anyone? [EaterWire Inbox] 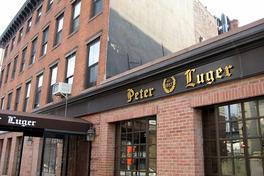 WILLIAMSBURG—With all of the steakhouses that have opened in this city within the past few years, it was inevitable that prime cuts of meat would be harder and harder for restaurants to come by. Well, steak-serving institution Peter Luger's been affected by the dearth of good beef; recently, they had to introduce rib eye to the menu, as they were having trouble getting their hands on enough porterhouse. [Cutlets]

PARK SLOPE—Per the commenters and a note that landed in the Eater Mailbox, we're alerted to the fact that there are currently a few cafes in the city that serve sweet, sweet La Colombe coffee. From a reader, "Hey there - no argument that La Colombe is the best coffee in Philly or anywhere, but true devotees know that it's been in Brooklyn for years, at Cafe Regular on 11th & 5th in Park Slope. Word up to Martin who runs the place." [EaterWire Inbox]