EaterWire AM Edition: Julius Closed, Seized For Nonpayment of Taxes

Share All sharing options for: EaterWire AM Edition: Julius Closed, Seized For Nonpayment of Taxes

WEST VILLAGE—Yesterday, Julius, the longstanding West 10th Street gay bar, was seized by the New York State Department of Taxation and Finance. To our gal on the scene, Kelly Dobkin: "According to the signs, looks like the building was seized due to nonpayment of taxes. Damn. Julius is one of if not the oldest gay bar in the city. (And from what I hear, they had a pretty good burger too.) As for their future? Looks grim. And considering the joint hasn't had a working phone number in quite some time, I'm going to turn my investigation toward other older pubs in the area and see if locals have any more information on the situation. Consider this developing." And so we shall. Hat tip to the Eater field agent, who initially alerted us to this situation.

Above and below, the photographic evidence. 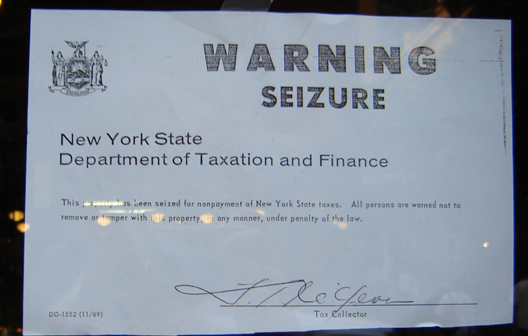 SEIZURE: This property has been seized for nonpayment of taxes. All persons are warned not to remove or tamper with this property, in any manner, under penalty of the law.