The Plywood Report serves up news about restaurants and bars still in the construction phase. Being that it is through the help of kind people like you that this feature exists, we humbly ask for your help. 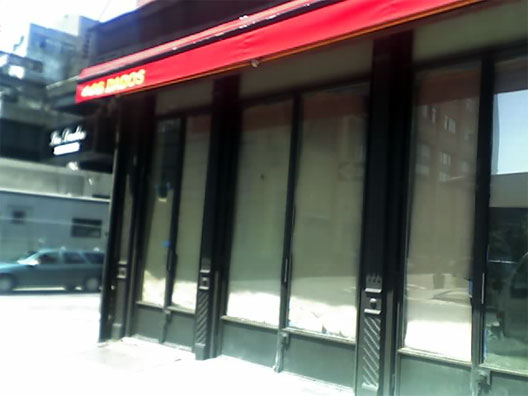 1) Meatpacking: We begin in an area that's felt oddly silent for plywood as of late, good ol' MePa. A tipster sends the above spycam pic, noting, "Here's a shot of the restaurant going into the old Meet space on Gansevoort and Washington. Los Bados? Not 100% sure of the name, but i remember the tag was something along the lines of 'modern mexican kitchen'." In fact, it's Los Dados, David Rabin and Sue Torres' forthcoming Mexican joint, which does seem to be progressing to debut rather nicely. [PLYWOOD] 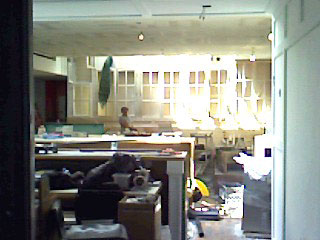 2) West Village: At right, a glimpse into the progress at the former Jefferson space on West 10th. This is a bona fide Plywood vet at this point—recall that the gang behind Nolita's excellent Ruby's is taking over here. [PLYWOOD]

3) West Village: A little further south, a tipster reports, "The plywood has been removed from the former site of 50 Carmine—looks like it's going to be a Japanese tempura place called BarFry and even though it was slated to open in September, it looks nearly ready." [POST-PLYWOOD]

4) FiDi: Way downtown, the Cuozz had the scoop yesterday that the family behind midtown eatery Fresco by Scotto plans a restaurant at 10 Hanover Square. Lease just signed; opening set for early 2008. [PRE-PLYWOOD]

5) East Village: Finally, a reader query. "any idea whats going on on avenue b between 12th and 11th? radio perfecto closed about 6 months ago (maybe more) and since then it's all covered with plywood... the occasional construction workers walking in and out, up to something!"